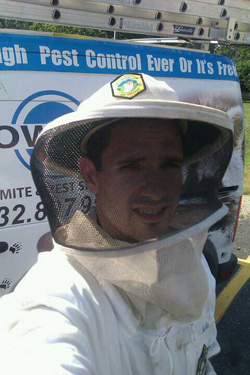 New Jersey is home to many different types of stinging insects. It is important to identify these infestations, especially for households with children, elderly, or those with medical conditions. The outside of the home, especially deck and patio areas, should be regularly inspected. Outdoor insect infestations can turn into troublesome indoor infestations.

At Cowleys Pest Services, we have licensed, trained technicians with the proper protective equipment and the right products to treat infestations safely in Edison, Somerset, Lakewood, and nearby in New Jersey. Call 1-855-239-9059 or click below to schedule a free estimate today!

"Made an immediate appointment which I really needed."
By Leslie M.
Cream Ridge, NJ

"I am happy with how my house was serviced for Carpenter..."
By Gordon G.
Manahawkin, NJ

"Overall an excellent experience during a difficult time."
By John L.
Bayville, NJ

"I had either the beginning or a remnant of a hornets nest..."
By David D.
Monroe Township, NJ

"Their quick response and timing to address my pest..."
By Lorraine S.
Brick, NJ

"Will was very thorough and professional. Spent alot of..."
By Adam P.
Belmar, NJ

By Robert A.
Long Branch, NJ

"On time, professional, and good to deal with. These guys..."
By Stephen G.
BELMAR, NJ
See More Reviews

The Dangers of Stinging Insects

Stinging insects are a serious medical threat. Their stings can cause a wide range of negative reactions. For some, a sting may cause localized pain, itching, redness, and swelling. However, for others, insect stings can trigger a life-threatening allergic reaction, or anaphylactic shock, requiring immediate emergency care.

Removing stinging insects and nests can be dangerous work. Don't underestimate the injuries a swarm of angry bees or wasps can cause. Every year, hundreds of thousands of people wind up in a hospital emergency room because of severe reactions to insect stings.

How Do Stinging Insects Enter Your Home?

Bees and wasps enter homes through open windows or doors, cracks in siding or masonry work, and torn window screens. If you see them entering through a crack or crevice, don't seal their entry point before making sure they are eliminated or you may be trapping them inside your home.

Why Hire Professionals for Bee Removal

Avoid needless injuries, assure you're not destroying a legally protected honeybee hive, and completely rid your home of pests with the professionals at Cowleys Pest Services.

Hazardous over-the-counter bee and wasp killing sprays only work if applied directly onto the nest. Meaning if you don't quickly and effectively destroy the nest, you are susceptible to life-threatening injuries.

Our specialists can assess your pest problem and recommend viable solutions. To learn more about our bee and wasp removal services or to schedule a free estimate in Edison, Somerset, Lakewood, Bridgewater, Brick, Toms River, Old Bridge, Middletown, Princeton Junction, Piscataway, and nearby in New Jersey, call 1-855-239-9059 or contact us online today!

Do you need more information about bees and wasps in New Jersey? Check out our in-depth bee and wasp technical papers by clicking the "Learn More" button!