We help get rid of ants fast and keep them away

Acrobat ants are slightly longer than 1/8 of an inch and vary in color from yellowish brown to dark brown. These ants are aggressive and territorial. They have a stinger, emit a foul odor when threatened and are quick to bite. Its heart-shaped abdomen is usually darker than the rest of its body. Its name comes from the way the worker ants carry their abdomens above the rest of their body as if they were performing a balancing act. These ants nest both outdoors and indoors. When nesting indoors, they are usually inside wood or cavities kept moist with leaks. They may also nest in foam insulating board or sheathing and as they excavate the galleries to be used as nest sites, sawdust may be deposited near the nest area. If nesting outdoors, they can find their way inside homes through cracks around windows and doors and other openings. Trails of workers may be seen moving between a nest and a food source. They feed on a variety of foods including other insects and sweets, and like many ants seek out aphid honeydew. Like all ants, the acrobat ants produce swarmers, winged, reproductive individuals that disperse in order to start new colonies. While swarmers are harmless, they are often the first indication of an infestation and the need for ant removal services.

View All Before & After Photos 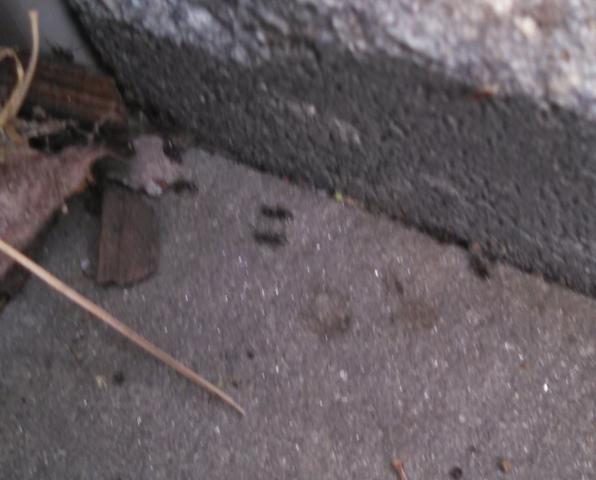 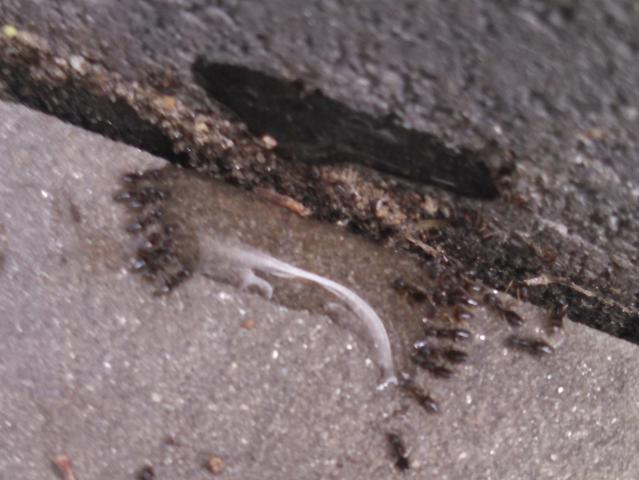 "Worked with your sales rep and tech at another company"

By Donna F. from Jackson, NJ
"A friend recommended you"

By Kathie from Toms River, NJ

By Elisabeth A. from Manalapan, NJ

By Kathy V. from Milltown, NJ
"I need to get the carpenter ants out of my house!"

By David A. from Freehold, NJ

By Barbara B. from Howell, NJ

Carpenter ants are wood-destroying insects. There are eight carpenter ant species of different sizes and colors found throughout New Jersey. The most common and largest of these ants is the black carpenter ant (Camponotus pennsylvanius). Carpenter ants cause damage by excavating wood – burrowing into it to make room for their growing colony. While carpenter ants don’t cause as much structural damage as termites, if left untreated year after year, carpenter ant damage in New Jersey can be extensive. Once a carpenter ant colony is established, they do not simply “go away.” You may not see foraging ants because their trailing habits change as their season progresses and the temperature and food availability may allow for external foraging, but once a colony is established, it will continue to expand as long as food and moisture are present – and, for ants, once they are inside a home, those items are easy to find. The only long-term solution to a carpenter ant infestation problem is removing or destroying the nest.

Is it time to get educated on carpenter ants? Check out our in-depth carpenter ant technical paper for further information by clicking the "Learn More" button!

Citronella ants are about 3/8 of an inch long and are yellow to red-brown in color. They are named for the citronella-like odor they emit when crushed. Living in subterranean colonies, these ants are seldom seen but may swarm indoors. Their colonies typically have mounds of soil around the openings where the excavated soil is deposited. Swarming may occur any time of the year but the most common swarming occurs in mid- to late summer. Normally, these ants go unnoticed unless the swarmers enter through expansion cracks in slabs or around door or window openings. Although these intrusions are alarming, the ants will not reproduce within the home in late winter to early spring when they are often confused with termites. Considered harmless, citronella ants feed primarily on the honeydew of root-feeding aphids.

Throughout New Jersey, there are several species of small- to medium-sized ants that make their way in and around homes and businesses. These ants, while some may bite or sting, are generally considered nuisance ants because they neither transmit diseases, with the notable exception of the Pharaoh ant nor cause property damage unlike the much larger, wood-boring carpenter ant.

Ant infestations can be troublesome because of their sheer numbers, their reproductive rates, their hidden nest sites and their “budding” of nests into multiple locations. It is ineffective to just spray along the baseboards where the worker ants have set up foraging trails in your home. The only way to remove an infestation is to destroy the colony and its protected queens. Unfortunately, with ant colonies there is not just one queen; there can be hundreds of them. Homeowners often compound the level of infestation by using spray treatments that cause ant colonies to move from known locations or fragment a colony into multiple colonies in different locations. When it comes to ant infestations, there is no substitute for using a professional pest control operator who has the tools and resources to get the job done quickly and completely.

Odorous house ants, commonly known as “sweet ants,” are small ants about 1/8 of an inch long and dark brown in color. Their name comes from the disagreeable odor that is given off when the worker ants are crushed. If you crush some ants and smell something that reminds you of rotten coconuts, you may have an odorous ant infestation. These ants can nest indoors in wall and floor voids; if only a few wingless ants are found in the house, they are likely nesting outdoors and a few entered the house in search of food. If winged swarmers are found indoors, or if there are many sightings of workers, it is likely that they are nesting within the home. These ants forage for food along well-traveled trails feeding on dead insects, sweets, and meats.

Odorous house ants are known for swarming kitchen counters and floors as they are foraging for sweet foods and liquids. Their minute size allows them to crawl into closed or sealed food containers making food contamination a problem. These ants expand their colonies by “budding.” The colonies expand by breaking into smaller colonies resulting in multiple nests with multiple queens. This growth process translates into a heavy infestation in a short amount of time. With odorous house ants, their massive populations, inaccessible nests, and swarming behavior require the tools and resources of a professional pest control company.

Pavement ants are small ants about 1/8 of an inch long and are dark brown to black in color. Their name comes from nesting under sidewalks and driveways and piling dirt removed from the nest in a mound on top of the pavement, often located between sidewalk cracks. The ants also nest under stones, logs, boards, and patio blocks and other items lying on top of the ground; they rarely nest indoors. Pavement ants become a nuisance when they enter homes in search of food. Entry points include doorways, cracks, and spaces under the siding. The expansion joint along the lower edge of sliding glass doors is a common, but often overlooked entry point.

Large numbers may swarm into buildings built on concrete slabs and the inaccessibility of their nests makes for a challenging infestation removal. The winged pavement ant swarmers are seen in the spring and summer and can be mistaken for termites.

Pharaoh ants, a major indoor nuisance pest, are also known as “sugar ants” because of their attraction to sweet foods and liquids. These ants are a yellow or light brown and are miniscule – even for an ant – with a length of about 1/16 of an inch (2 mm) making them difficult to see and allowing them to breach closed containers. These tropical species are sensitive to the cold so here in New Jersey, these ants live exclusively indoors, nesting in warm, humid areas near food and water, most typically kitchen areas in wall voids and under sinks or in bathrooms near water pipes. Pharaoh ants feed on a wide variety of foods including not only the usual attractants like jellies, honey, peanut butter, and fruit juices, but also grease, dead insects, toothpaste, and even shoe polish. Colonies proliferate by “budding” where a portion of the main colony sets up an alternative nest site. As a result, a single seed colony can become highly invasive. In addition, its colonies can contain harbor hundreds of queens so an infestation can grow alarmingly fast given that a single queen can lay hundreds of eggs in her lifetime and they breed continuously throughout the year.

Baiting is required and renewing the baits is often necessary because of the fractionating colonies associated with many species of house ants.

“Stephon the tech that was at my house was very professional...”

“Josh came to service my home today and...”

“Professional service from the time I called through understanding and addressing our problem. Thank you.”

“JIM WAS HERE 7/8/21 FOR ANTS SERVICE MS CALLED TO SAY THANK YOU FOR TAKING CARE OF ISSUE SO QUICKLY JIM WAS WONDERFUL AND SHE WILL BE SAVING OUR # IN HER...”

Preventative Steps to Discourage Ants from Invading Your Home or Business

Ant control is made easier if the following can be determined: their point of entry, their travel route, and what food they are foraging for. The exterior cracks through which they enter must be sealed. Inside the house, ants often travel along baseboards or under the edge of carpets. Spraying just prompts the ants to move their trail to another spot. Baits are often the best ant control method since the workers carry the bait back to the nest.

Pest infestation only gets worse with time and homeowner treatments generally do not work, or worse, spread the infestation to make it harder to treat. If you suspect a pest control issue in your home, call or contact Cowleys Pest Services today. We proudly service homeowners throughout Edison, Somerset, Lakewood, Toms River, Brick, Bridgewater, Piscataway, Old Bridge, Middletown, Princeton Junction, and the surrounding area.