Mice are more than just a nuisance. They can damage your property and affect your health. Mice chew through wires, eat drywall, damage insulation, leave behind droppings, make noise, and even die inside your walls.

Cowleys Pest Services will thoroughly inspect your home, identify and seal entry points, setup and remove traps, and provide preventive solutions to keep the rodents out of your home. If you live in Mercer, Ocean, Monmouth, Somerset, & Middlesex County, schedule your free inspection today for fast help with your mice control problem.

Get A FREE Quote!

How can Cowleys help with a mice problem?

The best solution for mice control problems is exclusion. Entry holes should be sealed with 1/4 inch hardware cloth, sheet metal, or metal wool and particular attention should be paid to any hole which approximates the diameter of a pencil. In some situations, perimeter trapping might prevent a population from becoming established indoors. Pet foods and other food products should not be stored in accessible areas, such as garages, and water sources which also attract mice should be eliminated.

Once deer mice enter a structure, they can be effectively controlled by using baited and unbaited snap traps and glueboards, anticoagulant rodenticides, and tracking powders. Their inquisitive nature makes them easy to trap.

Due to increased concern about the hantavirus, deer mice populations in structures should be eliminated as quickly as possible. Dead rodents and their nests and droppings should be removed immediately.

What's difference between a house mouse and a deer mouse? 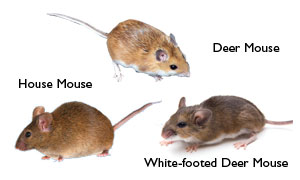 To a homeowner, a mouse is a mouse. Observing a scurrying little rodent dashing across his or her kitchen floor elicits disgust and an immediate response is to contact a wildlife removal professional. However, it is important to distinguish between field mice and common house mice. Because their biology and behaviors are different, the controls and tactics used by pest control professionals to resolve these rodent infestations are different as well.

Field mice and the common house mouse are distant relatives with little in common other than both being rodents. The rodent family is exceptionally large with over 4,000 species. The slightly larger deer mice have relatively larger eyes and often two-tone coloring, with darker colors over the back and white abdominal and limb hair coloring. This distinctive bi-coloration is not found on the house mouse. Deer mice are accomplished runners and jumpers compared to the house mice. The name “deer mice” was coined in reference to their agility. They are much more energetic rodents compared to the relatively tame house mouse.

The deer mouse is slightly larger than the house mouse and lives in weedy fields and grassy prairies. The deer mouse is about 3 inches long and weighs about an ounce. Brown with a white belly and white feet, the deer mouse has large, bulging eyes, big ears, and a short-haired, bi-colored tail as long as its body that is dark on top and white underneath. Deer mice feed on seeds and berries and burrow under rocks, boards, and haystacks. Deer mice are rare home invaders but may seek shelter when construction destroys their habitat, preferring undisturbed areas like attics.

The deer mouse is nocturnal and is most active at twilight. Winter activity takes place mainly under snow rather than on its surface. This semi-arboreal species climbs well, can swim, and may forage in shallow water. Deer mice usually walk or run, but when pursued, deer mice leap.

Also known as the "wood mouse," the white-footed mouse shares many characteristics and is often confused with the deer mouse. Named for its distinctive white feet, the white-footed mouse is light brown with a white belly and large eyes and ears. About 3 inches long, it weighs just under one ounce and has a narrow tail half its body length. White-footed deer mice feed on seeds, nuts, insects, and plants. Good swimmers, the white-footed mouse lives in marshes and wooded areas, nesting in underground burrows and often invading empty summer cottages. When food sources dwindle in autumn, these rodents may forage in garages.

Do you have a mouse in the house? Find out more!
Learn More!

Are you struggling with a rodent problem and are looking for additional education? Check out our in-depth rodent technical papers by clicking "Learn More." 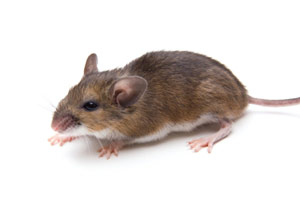 Why should you care whether you are dealing with a field mouse or house mouse? In one word: Disease! Field mice are vectors of serious, potentially fatal human diseases including hantavirus, Lyme Disease, and other diseases such as ehrlichiosis and babesiosis.

What is hantavirus and why should I be worried about it?

Hantavirus pulmonary syndrome (HPS) is an acute illness caused by a virus (hantavirus). It is associated with a high fever that rapidly progresses to acute respiratory distress syndrome and shock. Humans are infected when they inhale dust that contains dried contaminated rodent urine or feces or when the dried material becomes in contact with the eyes, nose, mouth, or open skin. It would be a safety precaution for homeowners protecting their family to assume that the droppings and urine of field mice are contaminated with the HPS virus. Field mice in one’s home is a serious health hazard.

What can a homeowner do to avoid contact with mice?

To protect against the HPS virus, the homeowners need to actively support the efforts of the wildlife technician. Keep a clean home, especially in the kitchen with food covered in rodent-proof containers and food particles removed from dishes, counters, and floors. Keep a tight-fitting lid on garbage and discard uneaten pet food at the end of the day. Fortunately, the virus has not been shown to infect cats and dogs.

Field mice are the primary carriers of the disease-transmitting deer ticks. Here in New Jersey, Lyme disease is contracted via the black-legged tick that feeds on infected mice and then transmits the bacteria to humans when they latch onto humans for their next blood meal.

Where are the danger areas?

Areas of patchy woods, which are very common in cities and suburban and rural areas, have higher populations of Lyme disease. In these fragmented areas, there are fewer larger predators and the smaller ones, like field mice, thrive. Smaller forest fragments have more infected ticks. Forest patches smaller than three acres, a common occurrence in Mercer, Ocean, Monmouth, Somerset, & Middlesex County, have an average of three times as many ticks as larger fragments – and of those ticks, seven times are infected ticks.

In small patches of forests, up to 80% of the ticks are infected with the Lyme bacteria as well as other emerging diseases such as babesiosis (a tick-borne malaria-like disease), anaplasmosis, and tick-borne encephalitis. These tiny, black-legged ticks have caused much human suffering here in New Jersey and in other states along the East coast – and they could not have done it without their partners in crime, the white-footed mouse, and the deer mouse.

What is the breeding season for field mice?

The breeding season is from late March through October, and each female produces 2-4 litters. After a gestation period as short as three weeks, a female gives birth to an average of 5 or 6 young. They disperse to establish their own home ranges soon after being weaned. Young deer mice become sexually mature at 35-60 days, and females may produce litters by the end of their first summer. Mortality of young is high, and even adults seldom live more than a couple of years.

Why hire a Pest Control Professional?

Infestations of the mild-mannered house mouse are often handled by the same pest control professional who deals with termites, ants, and other insect infestations.  Field mice infestations, on the other hand, are a completely different ballgame. Their behavior, nesting habits, and reproductive cycle are a unique issue.  Wildlife removal technicians, the same people who handle squirrels and raccoons, are often able to more expeditiously handle field mice with their specialized knowledge of their specific behaviors and habits. In the pest control business, one must know thy enemy since the most effective protocols for removing a particular pest must be based on the behavior and biology of that pest. There is no one size fits all approach when especially it comes to getting rid of these little crafty rodents known for their cunning stealth and maneuverability.

If you suspect a mice control problem, call or contact Cowleys Pest Services online today for a free inspection and estimate. We work throughout New Jersey, including Somerset, Edison, Lakewood, and surrounding areas.