The baldfaced hornet is not a true hornet; rather, it is an aerial yellow jacket. This stinging insect is named a hornet because of its large size and aerial nests, that are built at least a few feet off the ground. This insect gets its name from its distinctive ivory-white markings on its face. They build nests in bushes, trees, and often, especially when we are called, on the outside of homes or other buildings. Often, the nests are in protected locations, like under eaves or hidden away in some corner. In the spring, fertilized queens that have overwintered begin to build a nest, chewing wood and adding her saliva to make a grey papery material. As the summer progresses, the colony can grow to several hundred workers. If baldfaced hornet nests are built where they may be inadvertently disturbed, like on a building near where people come and go, or on shrubbery near where a lawn is mowed, they must be removed. However, these stinging insects are aggressive and will attack anyone or anything that invades their space. This makes baldfaced hornet removal challenging. Aggravating the colony can send hundreds of angry wasps right in your direction. One sting is painful; multiple stings are downright excruciating. And if you have a sensitivity to their venom, these stings are potentially life-threatening.

I was assigned to remove what turned out to be a baldfaced hornets nest that was constructed on the outside of a home in Allentown, NJ. The queen chose a water meter to build her nest. This posed a hazard to the meter reader and anyone else who ventures nearby. The nest was in a tight corner and difficult to access, especially if you don’t have the right tools. Fortunately, like a good boy scout, I come to every job prepared, hoping for the best, but expecting the worst.

The first step is to scare away the wasps that are guarding the nest’s exterior. Using the fogging and contact-killing aerosol, I killed or disbursed the first line of defense. Now, I was able to safely get close enough to the entry hole to dust it. I applied three large puffs from my bulb dust to kill all wasps in the interior of the nest. This treatment would also kill any returning wasps as they enter. I waited about ten minutes from the time of this treatment to monitor insect activity.

When all was quiet, I used my trusty bee pole to knock it down from a safe distance, so that the returning wasps wouldn't be able to sting me. I often wonder whether a pest control technician who was bitten one too many times came up with the expression “I would not touch it with a ten foot pole." when talking about wasp nest removal. Well, I don’t have to worry because my Super Bee Pole extends up to 18 feet! After removing the nest, I treated it with a residual chemical to kill any other returning wasps and to discourage them from building a new nest in the same area. Fortunately, the entire colony, other than the newly fertilized potential queens that will overwinter, die around the time of the first hard frost. These new queens that emerge the following spring will build their own nests, and the nests from the prior season are abandoned and not reused. 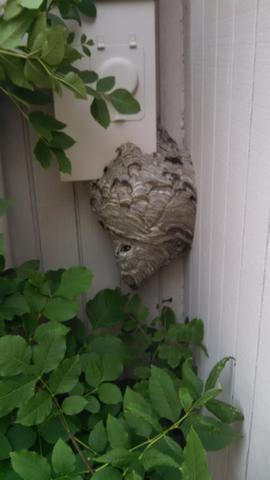 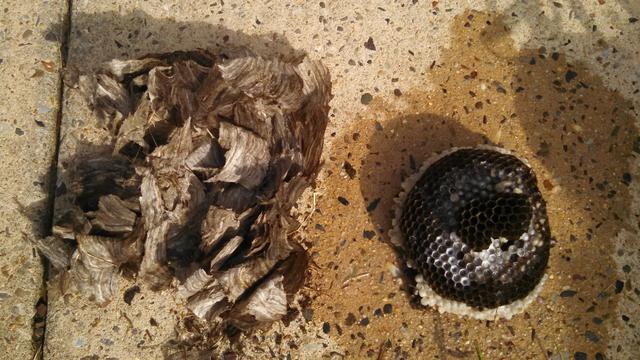 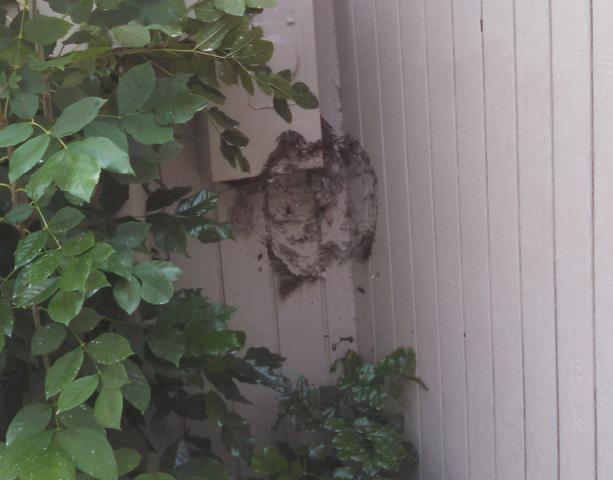 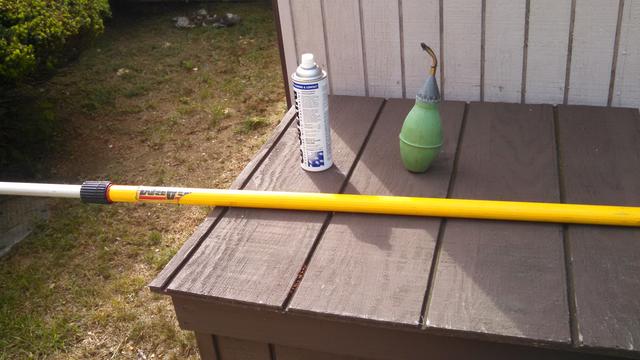 Tools of the trade used to remove a hornet's nest in Allentown.

"Competent, thorough, considerate!Jim and Michael were great! They did their work with recognition that they were helping my home become my home again.Thank..."
Read More
- Kathleen H., Lakewood, NJ