Recently, I got a call from a new client of ours in Asbury Park, NJ who was complaining of ants in her kitchen sink, countertop, and window. Once I arrived and began my inspection I could see ants in the window sink and countertop. Upon closer inspection of the ants, I realized they were pavement ants.  Now I’m sure you’re thinking, what is the difference from one ant to the next? Why is it so important to identify ants and know the difference? Well, the reason is simply different ant species require different treatment approaches. Ants are social insects, living in colonies that can number in the thousands. Ant colonies of some species have only one queen, while other species may have many queens. The queens stay in the nest, while worker ants forage for food for the colony, care for the queen and young, and defend the colony.

Pavement ants usually make their homes in, you guessed it, pavements! They can also be found under the floors, in the walls, and in insulation. The move in small motions and their diet consists of honeydew, insects, sweets, fruit, greasy foods and pet foods (they are a sucker for Beneful and Fancy Feast). Pavement worker ants also have a stinger that does inflict a little bit of discomfort, but essentially harmless to humans. Now that I identified what type of ant was infesting this client home, the next job was finding out where are they coming from.

I moved a few things off the countertop so I can get a Look. After removing a toaster oven from the wall, I saw the pavement ants traveling along the countertop and going down the side of the cabinet to the floor and in a crevice between the baseboard and the floor. Pavement ants will displace soil around concrete objects such as sidewalks, patios, driveways, curbs, etc. This displaced loose soil may be seen along the cracks or joints in the sidewalks or driveways.

Now that I located where their home was it’s time to evict them! I used a gel bait in the cracks and crevices going down to the baseboard. When it comes to pavement ants baiting is the most reliable way to eliminate the entire colony. The ant will eat the bait, carry it back to the colony, spread it around the entire colony and then goodbye ants! I then started treating the baseboard with the phantom aerosol and some more ant gel bait. Next, I went outside and treated around the window and the foundation of where the kitchen is. It’s imperative to treat both the inside and outside of the home and leave no stone unturned. 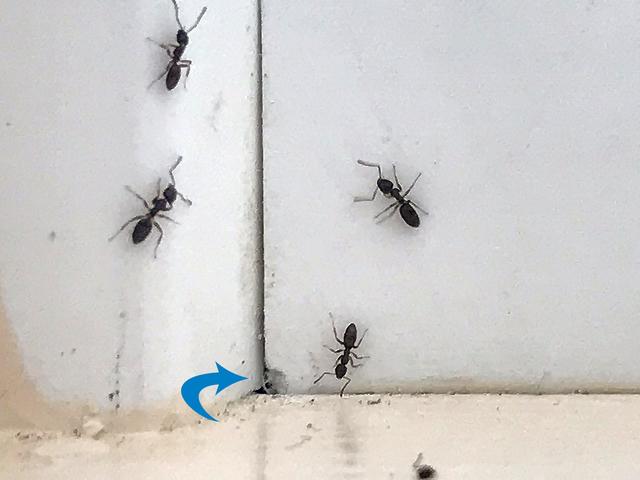 Here is where the pavements ants are entering.

Article: NJ Homeowner's Guide to Little Black Ants
Video: Check for Gaps Around Utility...
Video: Yellow Jackets Nesting in Vent in...
Back to Previous Page
Back to Case Studies