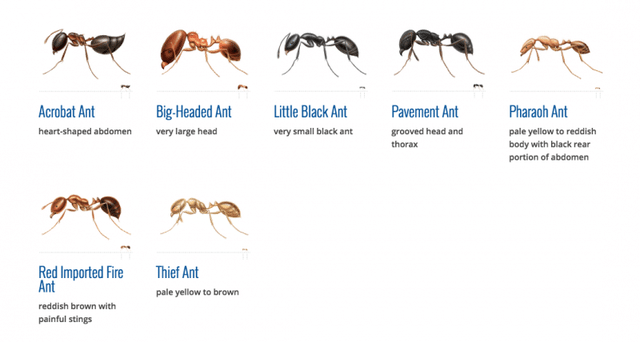 Little Black Ants, whose scientific name is Monomorium minimum, get their common name from their small size and dark color. These small ants are found throughout much of North America but are particularly prevalent in the eastern region of the United States as well as parts of southern California. These ants are frequently found foraging for food in trails on sidewalks during warmer months. Although they are a common site on pavements, they should not be confused with the larger pavement ant (Tetramorium caespitum) that is also commonly found on sidewalks.

The little black ant is small; the average worker and soldier are one-sixteenth of an inch long. The queen can be almost double that size. They can be dark brown in color, but it is more common for the ant to be jet black. Little black ants are also known for their shiny, almost glossy sheen.

Their small bodies can be separated into three distinct sections: the head, the mesosoma, and the gaster. Two antennae protrude from the head of the little black ant. These antennae have twelve segments with a three-segmented club at the end. The antennae of the little black ant is very important as they are used to help the ant smell and therefore find food. The head also contains the ant’s compound eyes and their mandibles.

The ant’s three sets of legs are attached in the mesosoma section of their body. This section of their body contains the muscles that power their relatively strong legs. At the end of each leg, the ant has a hooked claw. This allows the ant to climb and hang on to difficult terrain.

The last section of the body is the gaster section. In the little black ant, the gaster contains a stinger, however, due to their size, humans are not affected by the sting of a little black ant. The gaster is important when it comes to protecting their food source from other insects. The little black ant participates in something called gaster flagging. When the ants are distressed, they lift their rear ends together and vigorously shake them around in the air. This movement releases noxious toxins that keep other insects away from their food source.

Little black ants can be found in homes, but their colonies are most commonly found outside. The majority of colonies are located outdoors in an area that provides some amount of cover. A commonplace for colonies to form is under rocks, under tree bark, under piles of bricks, or in rotting logs. Sometimes colonies will form extremely close to houses, like under façade work on the exterior of a home. Occasionally they will be found in the walls of homes, but this is much less likely than other places. Little black ants are more prevalent in wooded areas but they are not exclusively found where trees are dense. The sub-species of the Monomorium minimum (Buckley) has highly adaptive nesting habits. These ants have been found to create colonies in a variety of areas, including open lawns.

Little black ants are omnivores. They eat a variety of foods from honeydew (the sweet nectar produced by sap-sucking insects, like aphids), to common household foods like grease, meats, fruits, and vegetables. Some of the workers have even been known to attack and eat other insects. When searching for food, little black ants travel together in a long line. They create this line by excreting a pheromone that allows other ants in their colony to follow the same trail. The trail is referred to as a pheromone trail. This allows the ants to easily go back to the food source once it has initially been located.

Little black ants generally do not pose a significant health risk to humans, however, their sheer numbers can create an unpleasant situation should they enter a home or office setting.

It is important to use an Integrated Pest Management System (IPM) when dealing with little black ants. Simply spraying is not as effective as making changes to the availability of their food source, blocking their entrances, and then possibly the use of chemical deterrents.

Although little black ants liberally eat naturally occurring honeydew, they are drawn to food that humans consume. Because of this, it is important to keep food in containers that seal completely. Glass containers with tightly fitting lids are a good deterrent for ants. Any spills, especially those containing sweet liquid, must be cleaned up immediately. Some foods that draw ants to a home can be overlooked. For example, pet food that is left out during the day can attract ants. Another commonplace that is overlooked is the trash can. If you have a trash can that does not have a tight-fitting lid you could be attracting little black ants.

Their small size helps little black ants to better squeeze through tiny holes in order to enter your home. It is important to look for small holes and cracks in your home that lead to the outside. Often these cracks may be found by following the ant trail from the food source. Once the cracks and holes are found they should be properly sealed. Silicone caulk is the best way to seal many of the openings.

Although homeowners may find it possible to eradicate little black ants from their homes, it is often a more prudent choice to hire a professional who will be better able to find the small entry holes the ants use to enter the home. A professional will also be able to use targeted techniques to ensure a safer eradication process.