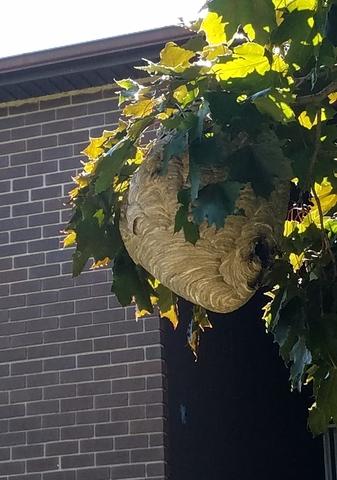 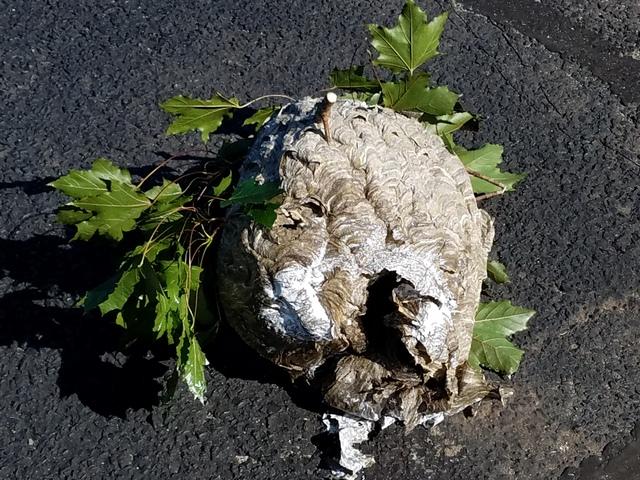 I was sent out by Cowleys to an apartment complex in Barnegat Light to remove an active hornets nest. The insects built their nest in a tree that was close to one of the buildings in the complex. Normally, a hornets nest does not pose a threat to people as long as the nest is not disturbed or approached. Unfortunately, every so often, these pests decide to build their nest in locations where people may inadvertently come too close to the nest. If they feel that their nest and territory is being threatened, a multiple stinging insect attack can easily result. This particular nest was built in a sensitive location. It was about five feet from the sidewalk entering the building and about seven feet off the ground. It was clearly a threat to any of the tenants forced to walk by the nest in order to enter and exit the building. It was an unacceptable situation, and I arrived to correct it.

To deal with this hornet problem, I first incapacitated the hornets that were inside the nest by treating it with a quick knock-down product. Once most of the hornets inside the nest were either dead or dying, I carefully cut the branch holding the nest out of the tree. Whenever you are doing a nest extraction, it is important to be mindful of any foraging hornets returning to the nest. They don’t take too kindly to seeing their nest being removed!

Once the nest and the supporting branch were separated from the tree, I
cut off excessive foliage to remove the treated nest, which I then bagged so that I could remove it from the property. The returning foraging hornets will swarm around the nest site for awhile, but they’ll soon move on when they realize that their nest is no more and there is not even any residue of the old nest to build on.

Territorial stinging insects like wasps and hornets mean trouble when they decide to build a nest too close to a home or commercial structure. In these cases, the nest needs to be removed by a pest control professional, preferably before there is a serious wasp attack on an innocent person who happens to be at the wrong place at the wrong time.