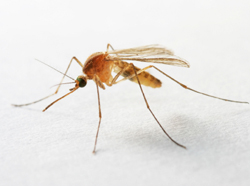 The mosquito has been man’s most persistent and deadly foe. Millions die from malaria, yellow fever, West Nile virus, and other mosquito-transferred pathogens every year. Human malaria, the deadliest of all the diseases passed by infected mosquitoes, kills more than 3 million people annually. Today, most malaria infections are found in sub-Saharan Africa. Fortunately, incidents of malaria in New Jersey, with the exception of two unusual cases of malaria contracted in August 1991, have all but been eliminated. Malaria is no longer a threat in New Jersey because of our state’s vigorous response to mosquito control in the early 1900s.

New Jersey's mosquito control infrastructure can be attributed to the dedicated work of one man, James B. Smith. Smith, who established Rutgers’ Department of Entomology around the turn of the century, is considered the father of mosquito control. Through his vigorous lobbying, he convinced the state legislature that mosquitoes needed to be dealt with at a state level. He established that one county could be infiltrated with mosquitoes bred in a marsh or swamp of another county. As a result, New Jersey established a coordinated effort for mosquito control through county mosquito control commissions with oversight from the Rutgers New Jersey Agricultural Experiment Station. These so-called Smith laws, adopted in 1912, are still on the books today. Smith died shortly before the bill was signed into law. Dr. T.J. Headlee implemented Smith's vision and Dr. Bailey B. Pepper thereafter continued Headlee’s considerable efforts. 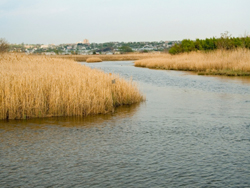 Thanks to the early leadership and foresight of these three dynamic entomologists, New Jersey has enjoyed one of the most successful mosquito control program in the country. As evidence of this, New Jersey is the only state that mandates its state land-grant university to research and recommend solutions for mosquito control.

Today, Rutgers is viewed as the birthplace of vector biology and control. It is no exaggeration to say that the Jersey shore recreational industry owes its existence to these mosquito control initiatives.

How do mosquitoes feed?

Why do mosquitoes bite in the first place? Mosquitoes are not like ticks, bedbugs, and other insects that are exclusive blood feeders. Rather, like most insects, mosquitoes rely on sugar for energy, obtaining it from plant nectar and plant juices. However, female mosquitoes bite because they need blood to develop fertile eggs. From this blood meal, the female extracts all of the proteins and nutrients needed to produce up to 300 eggs. Male mosquitoes, on the other hand, don’t produce eggs and don’t bite anyone for a blood meal. 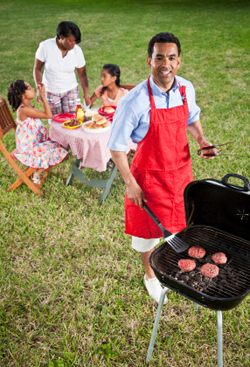 Mosquitoes are similar to deer ticks in that they transfer a variety of blood-borne diseases from one host to another. As such, ticks and mosquitoes are known as disease vectors, acting as middlemen that transfer blood from an infected host to some other victim, including humans and pets. Encephalitis viruses transmitted by mosquitoes include Eastern Equine Encephalitis (EEE) and West Nile Virus.

The 1959 outbreak of EEE in New Jersey resulted in 22 deaths. In response to this outbreak, the state legislature funded the T.J. Headlee Research Laboratories at Rutgers, which today houses the Center for Vector Biology. The Center provides research and information about mosquitoes, including regional population trends and infection rates for Eastern Equine and West Nile Viruses. It is currently engaged in research aimed at suppressing the Asian Tiger Mosquitoes in urban areas. This particular mosquito transmits Japanese B encephalitis as well as Dengue Fever, which is also known as “Breakbone Fever” because the virus causes extreme aching of joints, even in the movable joints between the plates in the skull.

New Jersey is also at the forefront in wetlands management and mosquito control. Healthy functioning wetlands reduces mosquito populations because it provides a habitat for many natural predators of mosquitoes. Certain wetlands birds, frogs, fish and insects feed on mosquito larvae and adults. Wetlands also prevent or help reduce flooding so that water does not enter areas where there are no natural predators. New Jersey controls the mosquito population naturally using Open Marsh Water Management (OMWM). This technique controls the low larvae-breeding areas where water pools up and increases natural enemies of mosquitoes. OMWM does not require any draining or larvicides.

Mosquitoes on your property

Notwithstanding the exceptional work done by the state and county agencies in mosquito control, homeowners need to their part. If your property is a breeding ground for mosquitoes, it not only affects you but also your neighbors. Mosquitoes are more than a nuisance: they are disease vectors for humans and especially our pets, most known for transmitting the deadly disease of heartworm to our dogs.

So, how do you get rid of mosquitoes on your property? Get rid of the water! Mosquitoes require water in order to complete their lifecycle. Any kind of wet area or standing water make a good breeding ground for mosquitoes, including birdbaths, discarded tires, cans, and any other containers. To reduce the mosquito population, step one is identifying and removing sources of standing water.

What can Cowleys do to help with your mosquito problem?

If the water can’t be drained, such as in a koi pond, swimming pool, sauna, or hot tub, the pest control experts at Cowleys Pest Services will work with the homeowner to provide effective solutions that will keep your outdoor water safe and mosquito-free. Cowleys Pest Services has access to professional-use only larvicides that are capable of wiping out the upcoming generation of mosquitoes. Chemical control of adult mosquitoes should be considered when an event or some outdoor activity is being planned and you don’t want mosquitoes spoiling the special occasion. Cowleys Pest Services can make sure that your special wedding or family event stays special without the annoying buzzing of kamikaze mosquitoes hell-bent on ruining your affair.