We are inspecting over 1000 crawl spaces in a large community in Manchester. So far, we’ve had an opportunity to inspect approximately 300. The team assigned to this project has spent so many hours underground over the past few weeks that we are starting to feel like underground miners spending the majority of our working day in cramped, dark, stuffy, damp spaces. While miners work underground to find and extract minerals of value, pest control technicians muck around in crawl spaces looking for things that nobody wants — like mold and insects. It’s hard work, but whenever you come across insect or mold problems during your inspection, it’s very rewarding. Finding and identifying the problem is half the battle. Once an insect infestation is found, it can be resolved and any further damage to the homeowner’s property can be avoided.

As shown in the attached pictures, we’ve already found a crawl spaces with extensive termite damage. Crawl spaces are often a home’s biggest trouble spot because homeowners rarely, if ever, venture down there. They are often difficult to access, requiring a fair amount of bending and stretching. For elderly homeowners or those with limited mobility, venturing down into the crawl space can be outright dangerous.

An obvious sign of termite damage is destroyed wood. Since termites eat wood from the inside out, finding destroyed wood is a late sign of damage, and an expensive one. Generally, termite-damaged wood has lost its structural integrity and must be replaced. Needless to say, renovations jobs involving removing and replacing damaged wood is quite costly. In the most extreme cases, termites can cause so much damage that it is less expensive to raze the home and and build a new one from scratch. Even worse, termite damage is generally not covered under homeowner’s insurance because it is considered preventable damage.

Another common visible sign of a termite infestation are mud tubes. Usually, mud tubes are formed on the home’s foundation. They allow the termites to travel between the underground colony in the soil and the termites’ food — your home’s wood. However, every so often, you’ll see “hanging” shelter tubes (see attached picture). These occur in infestations that have been active for a long time in large beams. The termites build these tubes down toward the ground so they have better access along the length of the beam (think of the beam as a termite feeding trough!). Another sign of an advanced infestation are mud caps protruding from the base of the beam. Generally, by the time a home has freestanding termite shelter tubes hanging from floor joists, it’s a sign of major termite damage. Often, this sort of thing happens in neglected, ignored crawl spaces. The structural damage has yet to be determined, but if these floor joists need to be replaced, the repairs can easily run in the thousands. This level of termite infestation is precisely what homeowners should strive to avoid. 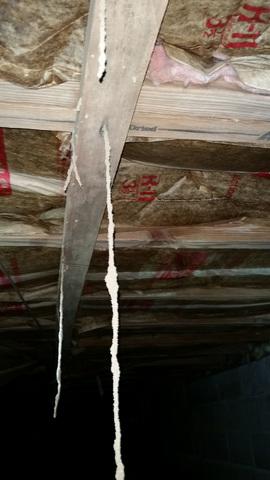 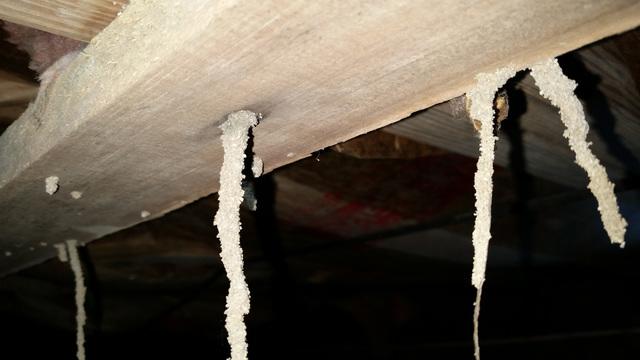 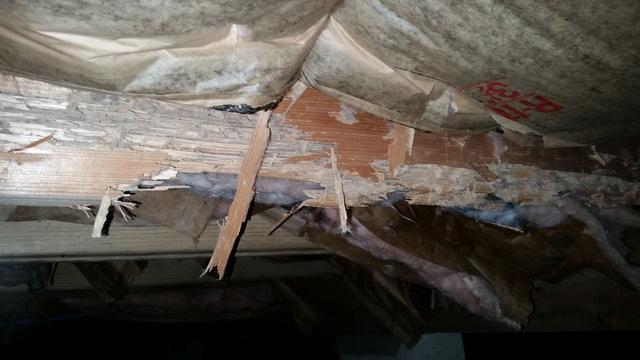 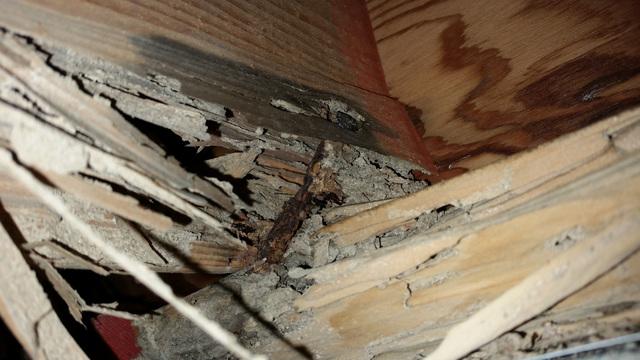 Extensive termite damage to a wooden crawl space in Manchester.

Article: Homeowners Guide to Termites
Back to Previous Page
Back to Case Studies 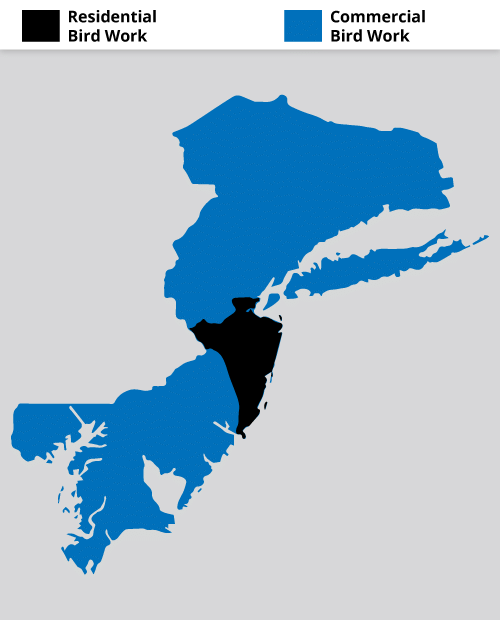