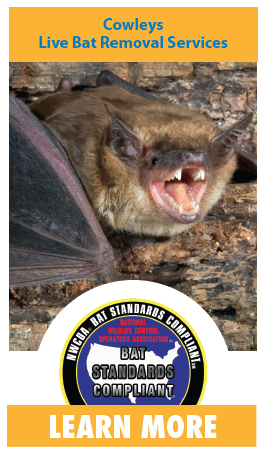 Perhaps no creature is as misunderstood and shrouded in mystery as bats. Are they birds? Flying rodents? Bats, with their rat-like faces consisting of large, bulging eyes, pointed snouts, sharp teeth, and alien-like ears, won’t win any beauty contests. It’s hardly surprising that along with ghosts, goblins, and spiders, that bats are popular Halloween décor.

The fear of bats is no doubt tied to the myths, legends, superstitions, and bad press over the years. Hollywood’s horror films associating bats with darkness, evil, and mythical vampires have also molded the public perception of these creatures. There are a host of incorrect beliefs surrounding bats. Many believe that they become entangled in people’s hair and that they thrive on human blood. None are true.

So, what is true? First, bats are neither birds nor rodents. They are mammals – just like us. The mother gives birth to live young and feeds them mother’s milk. But bats also have some very special qualities. Bats are the only mammals that can truly fly. They are also one of the few animals with the ability to echolocate. Echolocation is a type of biological sonar that uses the animals’ own sound transmissions to navigate in total darkness while hunting prey.

There are nearly 1,000 species of bats that make up almost one-quarter of all mammal species. New Jersey is home to only nine of those species; six of which are year-round residents and three of which are migratory. If someone happens to run into a bat in New Jersey, the odds are that it is the insectivorous Little Brown Bat (Myotis lucifugus), our most populous bat species.

Why are bats beneficial? 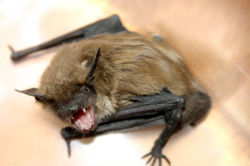 Insectivorous bats, such as those species found in New Jersey, are instrumental in insect control. Several studies indicate that small bats can capture up to 1,200 or more insects every hour. Bats do a phenomenal controlling the insect population, especially bothersome adult mosquitoes.

Although the objective in mosquito control is to kill them while still in their larval stage, as everyone knows, plenty of mosquitoes make it to adulthood. Bats help take care of the problem at the back end.

What are the common questions and concerns about bats?

At Cowleys Pest Services, I often receive frantic phone calls from homeowners who have found a bat suddenly appearing in their kitchen or living room.  There is a usual litany of questions:  “Is it rabid?”  “Will it attack me?”  “What should I do?”  I’m still waiting to hear “Will I turn into a vampire?”

Like most mammals, bats can contract rabies.  However, it is a common misconception that most bats are rabid.  Because labs test only bats that are submitted because they are rabies-suspect, the rates of rabies are often grossly inflated and, in turn, the media reports inaccurate information as to the public health risks posed by bats.  Experts estimate that about only one-half of 1% of bats are rabid (experts estimate about one in one thousand).  Rabid bats soon become paralyzed and die quickly.  They seldom become aggressive.   There is a much higher likelihood of vampire bats contracting rabies than insectivorous bats since they come into direct contact with the blood of other animals daily.  However, there are only three species of vampire bats and none of them are found in the United States.

Of course, bats are wild animals.  The same health concerns and precautions that we take with other wild animals like raccoons, squirrels, and skunks, apply equally to bats.  Bats that can be caught, especially those found on the ground or in unusual places, or are unable to fly should be assumed to be rabid or sick and treated with extreme caution.  If a homeowner needs to remove a sick bat from the house, thick leather gloves should be used.  Also, the bat must be disposed of in a place where it will not be found by pets or other animals.  Alternatively, a wildlife removal specialist will remove the bat for those homeowners who want no part of going near a sick bat.  Children, in particular, should be warned to never pick up or go near bats or any other wildlife for that matter.

There is a prevalent myth that bats like to fly and get entangled in people’s hair.  It’s simply not true.  Bats are used to flying in certain pathways and an unusual object, like a person, may be a natural curiosity especially if the person is a mosquito magnet, attracting one of their favorite foods.  As a bat removal specialist, I’ve handled hundreds of bats and have never once been attacked by a vicious bat.  Even vampire bats, which are not found in the United States, feed off cattle and poultry, not humans,

Perhaps, the most important place to start is what you can’t do.  Bats are a protected species.  It is illegal for anyone, including animal control officers and professional wildlife removal specialists to kill bats.  Terminal traps and poisonous bait traps should never be used.  That is why it is especially important to contact a wildlife control specialist who can remove the bats safely and humanely.  More important, after eviction, the specialist will “bat proof” the home to prevent later reentry.  The eviction and exclusion of bats are the only safe, permanent remedies. 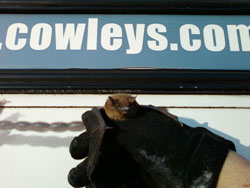 Also, a homeowner should never attempt to clean bat guano (droppings).  Bat guano should be considered a toxic hazardous waste that can harbor dangerous parasites and fungi.  Specifically, bat guano can contain the fungus responsible for histoplasmosis, a serious disease that can cause significant lung damage.  People can become infected with this fungus just by breathing in spores that are found in dry, dusty accumulations of bat droppings, especially when disturbed.  Bat guano should be handled and removed by a wildlife control specialist.  These individuals have the proper protective equipment and are trained in handling hazardous materials.

How does a homeowner determine where bats are entering the home?

Close inspection of entry points usually will reveal brown stains caused by body oils where the bats squeeze in and out and possibly a few mouse-like droppings adhering to the building just below.  Bats must eat and drink daily.  When they emerge at dusk to feed, watch your home to see where they leave.  Then, a closer inspection by a bat control specialist will reveal the holes or cracks providing access to a home.

Once exits have been located, the bats must be excluded to prevent re-infestation.  This should not be done when flightless young may be present which is usually in June and July.  Excluding the parents will starve the young and create an odor problem from the decaying carcasses.  Bats leave their roosts starting in August and into the fall.  The month of August is considered to be the prime period to set up physical barriers, such as netting, permitting exclusion during their winter absence. Bats are extremely roost-faithful, returning year after year to the same building sites.  When it comes to bat control, if exclusionary measures are not implemented, it is highly likely the bats will return.

If you are in need of bat removal services, contact the experienced professionals at Cowleys Pest Services. We proudly serve homeowners throughout New Jersey, including Somerset, Edison, Lakewood and the surrounding area.