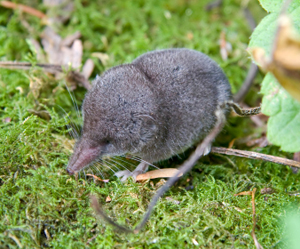 Shrews are some of the most aggressive mammals on the planet. Thoughts of shrews usually conjure up an image of angry irritable creatures somewhat like drivers during bumper-to-bumper traffic on the Jersey Turnpike. They are small animals with long narrow pointed and usually mobile snouts. Shrews belong to the Soricidae family of which there are 300 species. They feed on invertebrates, insects, earthworms, and vegetable matter. Shrews will feed on small animal life such as mice. The shrew commonly found in New Jersey is the Northern short-tail shrew, which like many residents of the Garden State, are very small, fierce, furry, mostly solitary animals that produce distasteful secretions to deter predators. They live on the ground surface and occupy burrows for sleeping or resting.

Shrews are not rodents. They are a completely separate category of insect-eating mammals.

Although similar to rats or mice in appearance, shrews are completely unrelated to rodents. They have a different biology, different behaviors, and, perhaps most importantly, a wildlife control technician must employ different techniques and strategies to get rid of these particular wildlife infestations. Shrews are non-hibernating mammals with high metabolic rates. And because of all that energy they are burning, especially when digging burrows, these creatures have voracious appetites, capable of consuming up to twice their body weight daily.

How do you distinguish shrews from rodents?

Shrews have five clawed toes on their feet while rodents have only four.  If you would prefer to not count toes, distinguishing characteristics are their long-pointed, flexible snout, large digging claws, small eyes, and tiny almost nonexistent ears.  Although beauty is in the eye of the beholder, these descendants of the most primitive placental mammals on our planet, most people find shrews to be one of the more hideous-looking creatures, alongside moles, that can invade one’s property. And regardless of their appearance, just like moles, shrews are capable of causing a tremendous amount of damage to a yard which is all the more reason to consider shrew control services by a trained professional.

The Northern short-tail shrew (Blarina bevicada) is found in parts of New Jersey, especially South Jersey including Gloucester County.  It is a small, short-legged mouse-like animal, but as an insectivore, it has the characteristic pointed snout, beady eyes, and tiny ears.  Unlike rodents, shrews do not grow teeth that must be worn down.  To protect tooth wear, they have dark-tipped chestnut-colored teeth, which is a mineral pigmentation.  Shrews look somewhat like a smaller version of a mole, but its forelegs are not equipped to dig in hard-packed soil.

The shrew is one of only a few mammals that have venom-producing glands used to kill or immobilize prey such as a mouse. It does not inject the poison; rather the poison is in the saliva and the toxins are soaked into the wound as the shrew chews on its prey. Shrews with their high metabolic rates must eat at least their body weight every day to survive and spends virtually all of its time hunting for any prey it can handle. They eat grasshoppers, wasps, crickets, and earthworms as well as mice, small birds, snakes, and slugs. Shrews commonly follow mouse trails looking for a meal. If mice have entered your home, there is always the possibility that a shrew has followed right behind.

While shrews may look like mice, they don’t behave anything like them. Shrews are highly aggressive for their size and will not hesitate to attack prey larger than itself.  For better or worse, after Shakespeare’s comedy The Taming of the Shrew, the word “shrew” became an archetype of a woman with a violent, scolding, or nagging temperament. This word is meant to apply to those with a disposition similar to a shrew, which is known for its aggressive behavior and venomous bite.

Shrews are extremely solitary creatures with no tolerance of either sex except for a short breeding period. Shrews have life spans of a year or less. To survive cold periods they must burn up more energy and, if outside, will even live under a layer of snow to conserve heat. Their short life cycle is to eat and reproduce before death. Like field mice, shrews make runways in moss and vegetation and make their dens either in their own dug tunnels or in vacated tunnels of moles or rodents. Burrows are less than 1” in diameter so they can be challenging to locate.

Shrew Removal On Your Property

Methods for shrew control include trapping, baiting, and exclusion. Be advised: As a self-defense mechanism, shrews exude a musky odor from two sets of scent glands along their flanks and belly  Its pungent-smelling glands are a potent reason why shrews make such unwelcome guests in one’s home. They stink! If you have any doubt as to whether you have a shrew or mouse infestation (and you may well have both!), the shrew’s scent glands are a sure giveaway that you are dealing with something more than field mice.  Also, shrews tend to choose one or two locations over and over as a kind of “bathroom.”

Shrew removal can be tricky business, which should be left to a wildlife removal specialist with the experience in dealing with these burrowing animals.  It is a challenge to fight what you can’t see.  A wildlife removal technician understands shrew behavior and can recognize the subtle signs of their activity.

Call or contact Cowleys Pest Services today for a free inspection and estimate if you suspect you have a shrew control problem. We help homeowners in Somerset, Edison, Lakewood, Brick, Toms River, Piscataway, Bridgewater, Middletown, Princeton Junction, Old Bridge, and the surrounding area with their wildlife control issues.