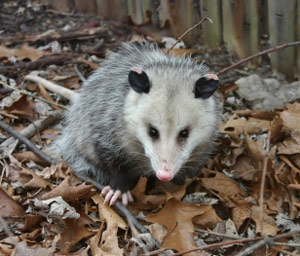 The opossum is the only marsupial in North America. The term “marsupial” comes from the Latin word ‘marsupium’ meaning pouch. Most marsupials, including the most famous marsupial, the kangaroo, live in Australia. Like other marsupials, the blind, helpless opossum young (marsupial babies are called joeys) develop in a pouch over the mother’s abdomen.

The only opossum found in New Jersey is the Virginia Opossum (Didelphis virginiana). Opossums are nomadic, opportunistic omnivores with a very broad range of diet. In human environments, opossums are attracted to pet food, birdseed, rotten fruit, and human garbage. Opossums will eat virtually anything and everything including carrion (dead animals). In captivity, opossums even cannibalize their own young. Like another well-known scavenger, the raccoon, opossums readily adapt to human habitats. Their flexible diet and high reproductive rates make them successful colonizers and hardy, highly resilient animals, which is why opossum control techniques are often a necessary step for homeowners.

An opossum is a whitish or grayish mammal about the size of a large house cat. They look somewhat like giant rats with their pointed snouts and skinny, naked tails. Its face is long and pointed, its ears rounded and hairless. Their long, hairless prehensile tail can be used to grab branches and carry small objects similar to the flexible use of tails by rats and porcupines. Sometimes the tail will be unusually short due to loss by frostbite.

Opossums may weigh as much as 14 pounds; males average 6 to 7 pounds and females average 4 pounds. They have 50 teeth — more teeth than any other North American mammal. Canine teeth (fangs) are prominent. Tracks of both front and hind feet look like little hands with widely spread fingers. They may be distinguished from raccoon tracks, in which hind prints appear to be made by little feet. The hindfoot of an opossum looks like a distorted hand.

Habitats are diverse, ranging from arid to moist, wooded to open fields. Opossums prefer environments near streams or swamps. They take shelter in burrows of other animals, tree cavities, brush piles, and other cover. They wander into human habitats to look for food and nesting sites especially residential areas near rivers and estuaries. Humans throw out extensive food waste and scavengers like opossums are quick to take advantage of it. In residential areas, they will den in attics, garages, crawlspaces, and underneath decks and houses where they make a messy nest. If you suspect there is an opossum in your home, contact a wildlife removal specialist immediately and do not attempt to handle the situation yourself.

Opossums eat anything and everything. 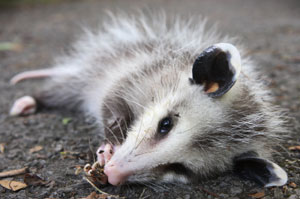 When someone pretends to be either hurt or dead, there is an expression that he or she is “playing possum.”  This term comes from the way opossums act when they’re in danger.  The opossum will fall over on its side and its curled-up body becomes stiff. Its tongue often droops out of its mouth and its breathing begins to slow down. This comatose state can last for up to four hours. During this time an opossum may expel feces, squirt a smelly green liquid from its backside, and blow bubbles of drool out of its nose.

This defense mechanism is that most animals don’t like to eat dead animals and opossums present themselves as something rancid and disgusting to eat.  An opossum plays dead until its enemy gives up and goes away. Even when poked, shaken, or bitten, the opossum won’t move. An opossum has no control over pretending to be dead. Its body stiffens on its own.

Opossums can cause extensive damage.

Opossum control is often needed because these animals become a nuisance near homes, getting into garbage, bird feeders, or pet food. Because they are opportunistic scavengers, they can come into conflict with people and pets. They can spread fleas and other parasites and leave extensive droppings around where they nest. In addition, they frequently die inside buildings, inside the attic or walls, and the smell of a rotting opossum will permeate an entire house.

Damage prevention and opossum removal methods include trapping and removing them and then exclude future access closing points of entry. The object is to remove the current infestation and prevent a later re-infestation.

Any wildlife that has entered your home should be considered a health emergency for your family. Opossums, like all other wildlife we remove, can cause extensive property damage very quickly including gnawing electrical wires and ruining insulation, and leaving extensive noxious staining, droppings. They can also transport parasites and ticks into your home.  Every day counts and a wildlife control specialist should be contacted immediately.

Exclusion is your first line of defense.

The first line of defense when it comes to wildlife control is exclusion, removing potential entry points into your house. An inspection will determine where and how the wildlife is entering your home so the homeowner is not faced with repeat infestations. Overhanging tree branches are common routes for wildlife to gain access to your roof. Burrows should be covered and plugged to reduce the frequency of visits by opossums.

Fortunately, opossums are usually easy to bait and trap. They are scavengers and when it comes to food they just can’t say no. A nuisance wildlife removal specialist will know where to set up the cages to be most effective, will monitor the cages, and relocate the opossums off your property once captured.

Professional pest control operators can remove opossums safely and humanely. Nuisance wildlife inside one’s home is an emergency. There is the risk of disease and injury to your family and extensive damage to your property from gnawing and waste deposits. Call or contact Cowleys Pest Services right away for a free inspection and estimate in Mercer, Ocean, Monmouth, Somerset, & Middlesex County, New Jersey.