Raccoon litters are usually in April and May 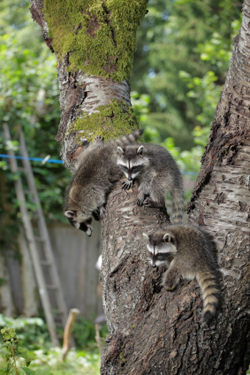 Raccoons usually breed in February or March, but mating can occur anywhere from December through June,depending on latitude. The gestation period is about two months. Most litters are born in April or May but some late-breeding females may not give birth until the summer. Only one litter is raised per year. Average litter size is 4 to 6. Young raccoons are born without teeth and with their eyes shut.  The young first open their eyes at about 3 weeks of age. Young raccoons are weaned sometime between 2 and 4 months of age.  The mother teaches the young how to hunt and climb trees.  The mother is very protective of its young and many raccoon attacks resulted from a person or animal inadvertently getting too close to her young.  Hell hath no fury like a mother raccoon protecting her young.

Raccoons have distinctive markings and tracks.

Raccoons have short oval ears, a pointed snout, and a black nose.  Two common raccoon look-alikes are the ringtail and white-nosed coati.  But these animals are not even found on the east coast, so if you see an animal that looks like a raccoon and you’re in New Jersey, it’s a virtual guarantee that you are dealing with a Jersey born and bred common raccoon and not one of its exotic cousins.  But a raccoon’s most distinctive markings are its prominent black “mask” over the eyes and a heavily furred, ringed tail. The animal usually has a grizzled salt-and-pepper gray fur, although some raccoons are strongly washed with yellow or have reddish-brown fur.  Most raccoons only live for about two to three years, dying from predators, disease, or man.If there are track markings in dirt, raccoons have pretty distinctive tracks.

Raccoon paws look amazingly like small hands. A raccoon paw has five fingers and they have amazing dexterity.  Raccoons have been known to turn a doorknob, open a refrigerator door, and even turn on water faucets.  The raccoon’s name comes from the Algonquin Indian word “aroughcoune,” meaning “he scratches with his hand.”  The name describes the raccoon’s fingers well.  Finally, its droppings, often found at the base of a tree, are like a dog’s but packed with seeds.

Raccoon Habitats:  The Key is Flexibility and Adaptability

Raccoons prefer hardwood forest areas near water. But it’s just a preference and it’s quite common to find raccoons far from naturally occurring bodies of permanent water. Here in New Jersey, with our estuaries, creeks, and more than 400 publicly accessible lakes, wildlife does not have to venture too far to find water.  And raccoons are not choosy about their real estate.  They will den in hollow trees, ground burrows left by other animals, brush piles, muskrat houses, barns and abandoned buildings, dense clumps of cattail, haystacks, or rock crevices.  Raccoons are commonly found in chimneys, sewers, under decks or in people’s attics. Once a raccoon has entered a home, whether through a chimney or damaged wood in the roof, it will den in any area that is isolated and insulated.

In towns and cities, raccoons choose to live very close to humans because we offer them a virtually unlimited, easily accessible food source.  For wildlife in human habitats, food acquisition becomes child’s play.  A telltale sign of raccoons are tipped over garbage cans.  At night, they are on a scavenger hunt for food and garbage cans are shiny, easy targets.   While the food in garbage will suffice, in the wild, raccoons are omnivorous, eating both plant and animal foods. Plant foods include all types of fruits, berries, nuts, acorns, corn, and other types of grain. Animal foods are crayfish, clams, fish, frogs, snails, insects, turtles and their eggs, mice, rabbits, muskrats, and the eggs and young of ground-nesting birds and waterfowl. Raccoons enjoy crayfish, frogs, clams, and mussels they find in shallow waters; feeling for their prey with their front paws.

Raccoons dunk their food in water.

Raccoons have an interesting behavior of dunking their food in water before eating it.  The raccoon’s scientific name, Procyon lotor, comes from “lotor” meaning the washer.  Contrary to popular myth, raccoons do not wash their food before eating it.  It appears that they are carefully feeling their food to make sure that there are no sharp bones or dangerous pieces in it.  As said earlier, raccoons are intelligent creatures.  They should never be underestimated.