Groundhogs (Marmota monax) are also known as woodchucks and whistle-pigs.  The latter name is probably due to the fact that marmots are highly social and use loud whistles to communicate with one another, especially when alarmed.  Groundhogs are a type of rodent, one of 14 species of the marmot family that fall into the category of large ground squirrels. Unlike the tree-dwelling grey squirrel, groundhogs prefer to live underground in burrows and hibernate there through the winter. Woodchucks are among the few mammals that enter into true hibernation. While most marmots live in mountainous areas, the groundhog has readily adapted and adjusted to a variety of New Jersey habitats, even taking up residence along the Jersey shore.

These rodents live a feast-or-famine lifestyle. They gorge themselves during the late summer and fall to build up fat reserves. Then, after the first frost, they retreat to their underground burrows and hibernate until spring, drawing their sustenance from body fat. In the spring, females welcome a litter of perhaps a half dozen newborns, which stay with their mother for several months.

Groundhogs destroy gardens and are carriers of rabies

Groundhogs are voracious consumers of vegetables and plants. They can decimate a vegetable garden, especially when they are eating in preparation for hibernation. The New Jersey Division of Wildlife considers groundhogs a rabies vector species along with raccoons, skunks, and foxes.  As such, there are restrictions as to relocation. A wildlife control specialist will ensure compliance with all applicable state laws and municipal ordinances. 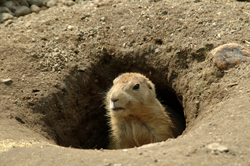 Groundhogs are readily distinguishable rodents once you've seen one.  Homeowners invaded by these animals sometimes mistake them for beavers. Beavers are much larger rodents with wide, flat tails and they do not hibernate.  Groundhogs usually have a grizzled brownish gray coloration. Groundhogs are covered with two coats of fur: a dense grey undercoat and a longer coat of banded guard hairs that give the groundhog its distinctive "frosted" appearance. The groundhog's spine is curved, more like that of a mole. Their short strong legs support the woodchuck’s compact, chunky body. Its forefeet have long, curved claws that are well adapted for digging burrows. Its tail, usually 4 to 7 inches long, is short, well furred, and dark brown.

Both sexes are similar in appearance, but the male is slightly larger.  Groundhogs weigh an average of 5 to 10 pounds.  The total length of the head and body averages 16 to 20 inches.  Like other rodents, woodchucks have white or yellowish-white, chisel-like incisor teeth. Their eyes, ears, and nose are located toward the top of the head, which allows them to remain concealed in their burrows while they check for danger over the rim or edge. Although they are slow runners, woodchucks are alert and scurry quickly to their dens when they sense danger.

Woodchucks are primarily active during daylight hours. When not feeding, they sometimes bask in the sun during the warmest periods of the day. They have been observed dozing on fence posts, stonewalls, large rocks that are close to the burrow entrance. Though they are usually seen on the ground, they can climb trees and are capable swimmers. These rodents frequent the areas where woodlands meet open spaces, like fields, roads, or streams. Here, they eat grasses and plants as well as fruits and tree bark. Mostly herbivorous, groundhogs primarily eat wild grasses and other vegetation, and berries and agricultural crops when available. Groundhogs also eat grubs, grasshoppers, insects, snails and other small animals, but are not as omnivorous as many other wildlife we remove.  They are not scavengers that eat anything and everything like garbage-seeking raccoons and opossums. As herbivores with a seemingly endless appetite, groundhogs are the stuff of nightmares for avid gardeners.

Groundhogs are natural-born excavators that dig up lawns

A large mound of excavated earth at the main entrance distinguishes woodchuck burrows. The main opening is approximately 10 to 12 inches in diameter. There are two or more entrances to each burrow system. Some secondary entrances are dug from below the ground and do not have mounds of earth beside them. They are usually well hidden and sometimes difficult to locate. During spring, the freshly excavated earth at the main entrance can locate active burrows. The burrow system serves as home to the woodchuck for mating, weaning young, hibernating in winter, and protection when threatened. 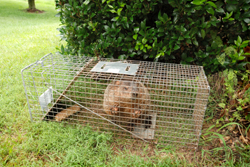 The woodchuck’s feeding and burrowing habits conflict with human activity and property. Damage often occurs in home gardens and around buildings, and sometimes around dikes. Woodchucks damage fruit trees and ornamental shrubs as they gnaw or claw woody vegetation. Gnawing on underground power cables has caused electrical outages. Damage to rubber hoses in vehicles, such as those used for vacuum and fuel lines, has also been documented. Mounds of earth from the excavated burrow systems and holes formed at burrow entrances present a hazard. On occasion, burrowing can weaken home foundations. The most common groundhog control technique is fencing. A groundhog removal specialist should be contacted if there are burrows and other evidence of groundhog activity around one’s home.

Groundhog hibernation gave rise to the popular American custom of Groundhog Day, held on the second day of February every year. Tradition dictates that if a groundhog sees its shadow that day, there will be six more weeks of winter.

Despite the public perception, groundhogs are not cuddly little critters.  They've bitten their handlers, refused to budge from their beds and have lost their shadow-casting jobs to the much more amiable potbellied pig. Not surprisingly, statistical data has shown that groundhogs have absolutely no weather prediction abilities. The National Oceanic and Atmospheric Administration analyzed the forecasts of groundhog prognosticators from 1988 to 2010 and concluded there was absolutely no correlation between a groundhog’s “predictions” and the length of winter weather in a given year.

Punxsutawney Phil has enjoyed the premiere spotlight of all of the east coast celebrity groundhogs.  Phil has the distinct advantage of being from the small Pennsylvania town near Pittsburgh where Groundhog Day originated.  Phil was given a national stage to elevate his celebrity status because of the now classic 1993 comedy film “Groundhog Day” starring Bill Murray as an egocentric weatherman who finds himself stuck in Punxsutawney repeating the same day over and over.  But now Punxsutawney Phil is facing stiff competition right here in New Jersey.  In Milltown, near North Brunswick Township, there is Milltown Mel who is making his own local predictions about the length of winter weather.  If that were not enough prognosticating marmots, New Jersey is also home to Essex Ed as well as the newest groundhog to make her annual appearance, Seaside Snooki, right here on the Jersey shore.

None of these groundhogs are considered pets, even prima donna Punxsutawney Phil.  According to Mike Johnston, vice president of Phil’s Inner Circle in Punxsutawney, where Groundhog Day began, "Phil is not a pet. Phil is truly not as warm and cuddly as perhaps you would want him to be. Phil is, in fact, a wild animal," New York City Mayor Michael Bloomberg had his own intimate encounter with the groundhog Charles G. Hogg, more popularly known as Staten Island Chuck. Chuck, with his snarly New York attitude, promptly chomped on the mayor’s left index finger in 2009 when Bloomberg tried to coax him into the open using an ear of corn.

Groundhog removal should be left to professionals