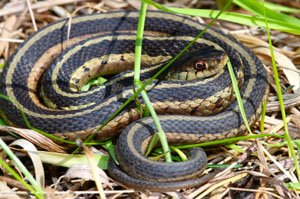 All New Jersey snakes are protected under the NJ Endangered and Nongame Species Conservation Act. It is illegal for anyone to kill or collect our native snake species. If there is a snake on your property, it legally must be trapped and relocated, preferably by a wildlife removal specialist.

According to the New Jersey Division of Fish & Wildlife, there are 22 known species of snakes found in our state. Snakes are extremely valuable to our ecosystem. They are important in the control of rodents and insects and are food to other animals such as hawks and owls.

Many New Jersey snakes are concentrated in either the northern or southern part of the state in forest habitats or in rural areas, often near bodies of water. However, there are certain species found throughout the entire state including the Northern Jersey shore.

Garter Snake: The garter snake is, by far, the most common snake found in the state, often making themselves comfortable around homes. These snakes often hibernate under the siding of a home. They are the first snakes to emerge from hibernation and can be seen as early as mid-March. Its color varies from olive brown to black and typically has three long stripes extending from head to tail.

Northern Water Snake: Another common snake seen throughout New Jersey is the Northern water snake. It’s called water snake for good reason. It lives near bodies of water including freshwater streams, ponds, lacks, swamps, marshes, and bogs.They are brown or grey with darker brown, reddish or black bands on the neck and back. It is often misidentified as a venomous snake and mistakenly killed.

Eastern Milk Snake: The Eastern milk snake is also found throughout NJ and may be found in barns or other building that has rodents. It too is commonly misidentified as venomous.

Black Rat Snake & Northern Black Racer: The black rat snake, which is New Jersey’s largest snake, and the Northern Black racer are found throughout the state in rural and semi-suburban areas.

Often the Northern water snake is misidentified as a venomous water moccasin (cottonmouth), which is not even found in New Jersey.

Does New Jersey have venomous snakes?

Yes. There are two species of venomous snakes in New Jersey but none are found in Monmouth, Ocean, or Middlesex counties. The Northern copperhead is in New Jersey’s northern region. The copperhead is two shades of copper or a reddish brown forming a pattern an hourglass shape. The head is a solid copper color. In New Jersey, no one has ever died from a copperhead bite. These snakes will not chase you, but they will defend themselves. The best rule for any snake is to keep your distance.

The second venomous snake found in New Jersey is the Timber Rattlesnake found in the northern region along the Kittatinny Ridge and the Highlands Region extending from Passaic and Morris counties.  (For those in Northern Jersey Shore, venomous snakes are not found in Atlantic Highlands.)  These snakes are also found in the Pine Barrens of southern NJ. These are a state endangered species and, like the copperhead, no one has ever died in New Jersey from a timber rattlesnake bite. 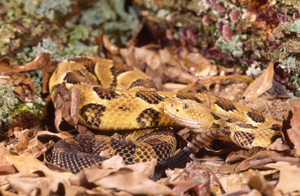 In fact, the only incidents of any bites relate to people who have physically handled the snake. Snakes bite when they feel threatened. Trying grab onto a snake without the proper training and equipment is risky. If the snake’s head is not immobilized while holding it, the snake will let you know in its own special way that it is not pleased with the situation.

Both of these venomous snakes are members of the pit viper family and have elliptical pupils like a cat (instead of round ones) and a heat-sensing pit located between the eye and the nostril. The Division of Fish and Wildlife’s Endangered and Nongame Species Program has a Venomous Snake Response Team (VSRT).  The VSRT has trained volunteers that are on-call to remove timber rattlesnakes or northern copperheads from private lands upon request.

It is extremely rare to encounter a venomous snake due to their elusive nature and preference for interior forest habitat. If you are traveling or vacationing in venomous snake country and encounter a snake, unless you are herpetologist who has devoted his or her career to the study of reptilian fauna, don’t decide whether the snake is venomous. Just assume that it is.  And it really doesn’t matter – ANY snake can bite.  So keep a safe distance. Always keep your dog on a leash in state parks and forests. Venomous snakes may administer a dry bite without injecting venom if the strike is in defense rather than for acquiring food.

Snakes in Your Home

Usually, first thing someone does is scream. Few things are as creepy as turning on the kitchen light late at night and seeing a coiled snake resting in your sink. Once you calm down, the best thing to do is immediately call a wildlife control specialist experienced in snake removal. Even though it is almost a virtual certainty that the snake is non-venomous, any snake is capable of producing a painful bite. If you start going after it and the snake feels trapped in your home and does not know the avenue of exit, there is the potential of being bitten. Some homeowners grab a broom and try to sweep it out the door. The problem is that if you have a fast snake that finds your actions to be threatening (and most would!), you may well wind up with a painful bite. And not just on your ankle. A snake’s body is very strong and some species are able to propel themselves as high as a person’s head

Exclusion is the best way to keep snakes out of your house.

Most snakes found inside houses tend to be smaller since they can find their way in through small gaps, gaps as small as the space under your front door or the sliding back door. Snakes can’t dig or chew so the only way they could have entered is through a gap or hole. The potential openings must be found and sealed.

Snakes in Your Basement and Crawl Space

Snakes have a special affinity to basements and crawlspaces. These partially underground structures usually have all the characteristics for an ideal snake cave. The space is usually a constant temperature; it is moist and damp, and quiet and free of activity. Unfinished basements often have cracks, water, and cobwebs (that is, spiders and insects). For a snake looking to hibernate, a basement offers just the right amenities.

How did the snake gain access to your basement or crawlspace? If your home has a cinderblock foundation, mortar between blocks can break away. If the crack is deep enough, a snake can gain access to the basement.  Sometimes cinderblocks are not filled in and the empty center is an ideal living area for a snake. If your home has a concrete foundation, cracks will offer a snake access. Snakes can also gain access through ground-level windows if the windows are broken or the sills are poorly sealed.  Snakes are not like raccoons, rodents, and other animals that can dig and claw their way into your home. If there is a snake in your house, there was some opening somewhere allowing access and you should contact a snake control expert right away.

Snake populations have declined over the past 50 years primarily because of habitat destruction. Snakes with especially low populations include the threatened pine snake and the endangered corn snake.

Unfortunately, snakes compete with bats as an animal that should be feared or destroyed simply because they exist. When we refer to someone as a snake, it’s not intended as a compliment. Many suffer from ophidiophobia, an abnormal fear of snakes. Research psychologists believe that our fear of snakes is hard-wired and rooted in evolution as a form of self-protection. To be sure, there are those who like snakes but most of us can either do without them or prefer that they be contained in a glass cage while admiring their beauty.

Snakes do not chase people although male snakes may move toward a perceived predator to protect their mates during breeding season. Snakes naturally avoid people as being potential predators.

Tips to Control Snake Populations On Your Property

The best method for snake control is to make the environment unattractive to the reptile. The needs of snakes, as all wild animals, are few. They want to survive; they want to eat; and they want to breed. Snakes reside in those places where there is sufficient shelter and food.

If you find a snake inside your home, garage, basement, or crawl space, contact an experienced wildlife removal specialist such as Little Rascals by Cowleys right away to remove and relocate the snake. Ask about how our crawl space encapsulation system can protect your home from wildlife and pests while keeping your crawl space dry.