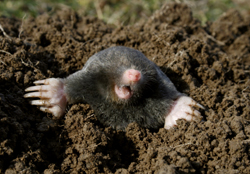 Moles are small animals with long, narrow, pointed snouts.  The most common mole is the Eastern Mole or Common Mole.  When homeowners in New Jersey are facing a mole problem, these are the primary culprits. Moles are subterranean, spending most of their lives in the darkness of underground tunnels that they excavate for themselves.

Moles are not rodents. They are a completely separate category of insect-eating mammals.

Although similar to rats or mice in appearance, moles are completely unrelated to rodents.  They have a different biology, different behaviors, and perhaps most importantly, a wildlife removal technician must employ different techniques and strategies to get rid of this particular animal. Moles are non-hibernating mammals with high metabolic rates. Because of all that energy they are burning, especially when tunnel-digging, these creatures have voracious appetites.  These animals are capable of consuming up to twice their body weight daily.

What is the difference between a mole and a rodent?

Moles belong to the family Talipdae.  Like all talpids, moles are small, dark-furred animals with cylindrical bodies and hairless, tubular snouts.  Their fur is dense and short.  They have small eyes and poor eyesight.  The external ears are very small or absent.  They rely primarily on their sense of touch, having sensory vibrissae (whiskers) on their faces, legs, and tails.  The flexible snout is particularly sensitive.  Moles tend to be timid and are easily alerted or frightened by unfamiliar noises.  They are usually active when and where the surroundings are quietest, and may sit motionless in a tunnel for extended periods of time when disturbed or frightened.

How do you distinguish moles from rodents? Moles have five clawed toes on their feet while rodents have only four. If you would prefer to not count toes, distinguishing characteristics are their long-pointed, flexible snout, large digging claws, small eyes, and tiny almost nonexistent ears. Although beauty is in the eye of the beholder, these descendants of the most primitive placental mammals on our planet, most people find moles to be hideous looking creatures. Appearance aside, they are capable of causing a tremendous amount of damage.

In New Jersey, the Eastern Mole or Common mole (Scalopus aquaticus) is the most common insectivore pest and the one that can wreck havoc on your lawn.  It is the only member of the genus Scalopus (which comes from the Greek word meaning digger). The misnomer species name given to this mole, Scalopus aquaticus, was based on the description of the original specimen that was found dead in the water and had webbed feet.  If the lack of association with water was understood at the time as well as the damage they cause to lawns and gardens, the mole should have been named Scalopus Destroylawnicus.  While all Talpidae are digging animals, moles are completely subterranean.  These “fossorial” (adapted to digging) mammals spend practically their entire lives underground.

How big are moles?

Moles are about the size of chipmunks and can weigh anywhere from three to six ounces with a total length of six to eight inches. Moles have white teeth and enormously enlarged, long-clawed forefeet. These broad, shovel-like front paws resemble oversized gloves with hands turned permanently outwards to aid in shoveling dirt away from and the front of the body.  In contrast to their grotesquely enlarged forefeet relative to the size of its body, a mole has reduced hind feet and pelvis and short thick fur than can be rubbed backward or forward as it moves in its tunnels.  Its eyes are poorly developed and, with their sealed eyelids, are limited to detecting light from dark.  In short, the biology of these animals is highly specialized for a life of tunneling, feeding, and living underground.  They are active both day and night and do not hibernate.

What do moles eat? 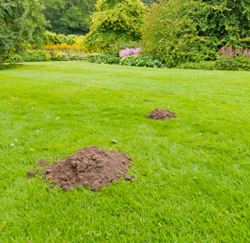 Moles have a voracious appetite, feeding primarily on earthworms and other invertebrates such as grubs, millipedes, and ants.  Although moles eat a variety of insects, their primary food source is, by far, the earthworm.  As such, trying to control grub and lawn insects will do absolutely nothing to reduce mole activity.  It is not appropriate, and is technically not legal, to apply a grub control insecticide to eliminate moles.  First, the insecticide is not labeled for mole control, and second, it won’t work.  Moles may eat grubs, but they eat a lot of other things as well.

The Eastern Moles make two types of tunnels.  The pushed-up type we see are temporary feeding tubes, normally used for only a few weeks.    The second deeper ones are more permanent.  Nesting and resting chambers may be attached to these deep tunnels. A separate chamber is used as a latrine site.   In ideal soils, moles can tunnel at a rate of over one and one-half feet per minute.

The Eastern mole is known for making ridges as well as hills of excavated soil.  Foraging tunnels just under the surface (creating well-known surface mounds) can be dug at ten to twenty feet per hour.  It has been reported that eastern moles can dig up to 100 feet of tunnel in a day.  The longest recorded tunnel was traced along a fence line for 3,300 feet.

Males construct more extensive tunnel systems than females and make two kinds of burrows:  shallow feeding tunnels just under the soil and deeper tunnels (as deep as two feet) that are more permanent retreats during dry or cold periods.

A tunnel for a purpose

Many feeding tunnels are used for foraging only once while others may be used more frequently and for many years.  These are the annoying pushed-up tunnels whose damage is readily visible to us.  Most food is obtained when the prey falling into the feeding tunnels.  Tunnels follow the grubs and worms so they are shallow in the summer and deeper in the winter.

Moles spend little time actually digging tunnels.  The energy required to construct a permanent tunnel system is great.  Considering the energy spent, mole tunnels will be used for years especially in soils that have a high density of earthworms and similar insects.  To protect this investment, moles scent mark most of the home range daily as they travel through the system in search of food.  It warns other moles that the system is occupied and may advertise a female’s scent when she is ready to mate. The scent can be picked up by a rutting male crossing marked tunnels.  But sometimes, moles must continue to dig.  In acidic soils that are poor in food, more time is spent searching for food by digging.  Tunneling and food are inversely proportional.  As the food supply decreases, tunneling increases.

Mole tunneling and damage is progressive as moles expand their underground network year after year.  That is why the level of damage from tunnels at any given time is not a reliable indicator of current mole activity on a property.  There is no way of knowing from the lawn damage, how many moles will have to be trapped out.  Also, it is important to determine whether the tunnel is an active one since most surface tunnels are used only temporarily.

We have heard of homeowners shoving the strangest things down tunnels to kill moles or get them off their property.  Lye, Drano, pickle juice, broken glass, red peppers, fumigants (poisonous gasses), razor blades, bleach, moth ball, chewing gun, rose branches, castor oil derivatives like Mole Med, human hair balls, ultrasonic contraptions, gasoline, and, believe it or not, even using explosives like the psychotic groundskeeper in the movie Caddyshack who was trying to kill the golf course-destroying gopher.  None of these age-old home remedies work for mole removal and there is not a single study that has proven them effective. Even worse, when wasting time with these unproductive approaches, you may well wind up causing damage to your lawn, risk dangerous chemical run-off, and give the moles even more time to build tunnels and become entrenched.

Getting rid of moles is tricky business.  If you are serious about saving your lawn, contact a wildlife control specialist with the experience in dealing with these subterranean animals.  It is a challenge to fight what you can’t see.  A wildlife removal technician understands mole behavior and can recognize the subtle signs of their activity.  Two well-known etymologists, Terry Yates and Richard Pederson, stated “Moles are probably the least understood major component of the North American mammalian fauna.”

Resolving a mole problem requires trapping.  There is no substitute.

Trapping is the only tried and true method of mole control.  We also use Talpirid, a gummy worm-like bait specifically designed by Bell Laboratories to kill moles, to support and augment our mechanical trapping program.  But traps are the foundation of any effective mole control program.  When it comes to getting rid of moles, make no mistake about it:  Mole removal is a war of attrition.

Why use a trained wildlife control professional to set traps?

Deciding where a how to set mole traps is learned from experience.  It is not a haphazard procedure.  Mole trap work because moles usually try to reopen a blocked tunnel.  The trapper obstructs the tunnel and sets the trap against the obstruction.  Traps don’t go at the end of tunnels and you don’t shove them into the mounds.  As the mole clears the tunnel, it pushes on the trigger pan, releasing the spring and is then crushed by the trap.  They die instantly.  There is no effective way to trap moles for relocation.  These animals are nothing like the raccoons or squirrels and other animals we trap relocate.  The sole purpose of these subterranean creatures is to dig through soil and destroy land.  We can’t make them someone else’s problem.

Catching moles requires more than a one-time appearance.  These are shifty critters and you are dealing with subterranean animal so there is an element of unknown.  As such, Little Rascals Nuisance Wildlife offers a maintenance program so we can monitor mole activity over a period of time.  It is the only way of knowing whether moles have been removed from your property.

What type of damage do mole tunnels cause?

Old or existing tunnels and winter weather often spell trouble.  During winter rains, the water cannot drain properly through the soil because of the surface tunnels.  Any freezing of the underground water will heave the tunnels up.  During winters where there are multiple freeze-thaw cycles, deep tunnels not visible during the fall or early winter will be exposed.  Even though trapping removed all of the moles on the property, the freeze-thaw cycle will give the appearance of new moles entering with the soil eruptions.

Once mole tunnels are on your property and the moles are gone, other animals such as mice, voles, or chipmunks may take advantage of the underground passageways.  This is common when mole tunnels are around the foundation.  Water diversion through mole tunnels can also cause structural damage to the home, but fortunately, in our experience, such cases are rare.  Ground hornets and yellow jackets often nest in old mole tunnels.

Dealing with a mole problem quickly and effectively will reduce the opportunity for an extensive tunneling network and the likelihood of new moles migrating to your property.  However, depending on the tunneling network under your lawn, because of recolonization, trapping the moles currently damaging your lawn may not be a permanent solution.  If there is evidence of mole activity there must be an ongoing trapping program to be effective.