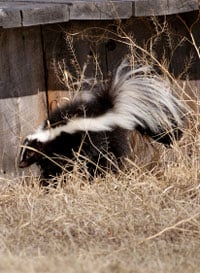 Skunks, or Mephitidae, are a family of medium-sized mammals about the size of a pet cat. They are typically black-and-white-furred. Skunks were once grouped with a family of animals that included weasels, ferrets, minks, and wolverines, but scientists decided they belonged in their own special family called Mephitidae. The word Mephitis is descriptive as it means foul smelling. Skunks are best known for their ability to spray a foul-smelling fluid as a defense against predators. Their spray is so strong it can cause temporarily blindness.

How to identify a skunk

The sole skunk species in New Jersey is the striped skunk (Mephitis mephitis). This skunk has distinctive markings, prominent, lateral white stripes that run down its back. Its fur is otherwise jet black. Most who see a skunk know what they are looking at and instinctively know what to do -- get away and quickly!

The skunk has short, stocky legs and proportionately large feet equipped with well-developed long, curved claws that enable it to be very adept at digging. The body of the striped skunk is about the size of an ordinary house cat with a very bushy tail. The body can be 13-16” long and the tail 7-16" long. Skunks can weigh from 6 to 14 pounds.

The Warner Brothers Loony Tunes character Pepe Le Pew was accurate in that skunks do have a natural malodorous scent. With its powerful scent glands, it’s hard to not walk around with a lingering odor. As such, the distinctive smell of skunk is a strong indication that there may be a den of skunks making a home underneath your deck or inside your crawlspace. Even skunk droppings have a strong musky odor. But odor alone is not always a reliable indicator of the presence or absence of skunks. Sometimes dogs, cats, or other animals that have been sprayed by skunks move under houses and making homeowners mistakenly believe that skunks are present.

The tracks of a skunk show 5 toes. The skunks dig their five long claws into the soil and the shape of a skunk footprint is readily identifiable to a wildlife removal professional. Perhaps the most noticeable sign of a skunk control issue is a strong smell of musk in the air. When skunks squeeze through small openings, they can leave a few long black or white hairs behind. Finally, cone-shaped holes in a lawn are a sign that skunks have been digging for food.

Every skunk has a weapon that if used by the military would be a prohibited chemical weapon under the Geneva Convention. The skunk has two small walnut-sized musk glands that are on both sides of an opening under the tail. When ready to defend itself against a perceived enemy it stands in a U-shape with its head and tail facing in the same direction.

Skunks do not spray every time and spraying is a last resort; they usually give warnings including stamping its feet, thrusting its tail high in the air in preparation like a warning flag, hissing, and clacking its teeth. Unfortunately, in suburban habitats, curious dogs are mistaken for predators and wind up with a noxious coating of skunk oil. They will only release their spray if they feel really threatened as the glands only hold enough liquid for five or six squirts and it can take up to ten days to reload. However, the musk is very concentrated and little is needed (less than half a teaspoon, only 3 milliliters) to send a strong message to a potential threat.

What is the warning sign a skunk is about to spray?

After the skunk bends its body into “firing” position (that’s when its time to exit!), tiny nipples appear under its tail. The skunk then uses its muscles to squeeze its glands. A yellow liquid known as musk shoots through the air. Musk, which also happens to be a base of aromatic substances commonly used as base notes in perfume, was a name originally given to a substance with a penetrating odor obtained from the gland of the male musk deer. The name originated from the Sanskrit word “muska” meaning “testicle.”

Each nipple on the scent gland can be aimed like the nozzle of a hose in the direction of the perceived threat and with uncanny accuracy. The foul-smelling oily spray may strike up to 15 feet away which results in a burning or stinging sensation to its victim as well as brief blindness if it lands in the eyes. The pungent substance is a strong-smelling organic sulfur compound that does not cause long-term damage but is effective in sending a message to a predator that there are better-tasting animals out there for consumption. When a skunk is running from its enemy and can’t aim its weapon with the precision of a stationary position, it opts for a noxious cloud mist behind it. Most predators give up chase rather than plunging into the musk cloud.

What kind of damage can skunks cause?

Homeowners should consider using skunk control methods when the animal becomes a nuisance because their burrowing and feeding habits conflict with humans. They may burrow under porches or buildings by entering foundation openings. Garbage or refuse left outdoors may be disturbed by skunks, but other animals as well are attracted to food scraps so this should not be relied on exclusively. Skunks dig holes in lawns, golf courses, and gardens to search for insect grubs found in the soil. Digging normally appears as small, 3- to 4-inch cone-shaped holes or patches of upturned earth.

What can you do if you are sprayed by a skunk?

If you or your pet are sprayed by a skunk, wash your body with vinegar or tomato juice. It will mask the smell until it fades with time.  Sprayed pets can be washed with tomato juice. Another recommended home remedy is a concoction of a quart of hydrogen peroxide, ¼ cup of baking soda, and 2 tablespoons of dish detergent. Unless your clothes are very important to you, it is best to discard them.

What can you do to prevent skunks around your home or business?

Exclusion: Close cellar and outside basement and crawl space doors; seal and cover all openings including window wells and pits.

If you're noticed skunks around your home or business, contact a wildlife removal specialist at Cowleys Pest Services. We can trap and remove skunks, animal proof your home, repair any damage and sanitize and deodorize the area. Cowleys Pest Services proudly serves homeowners in Mercer, Ocean, Monmouth, Somerset, & Middlesex County, New Jersey with their skunk removal needs.