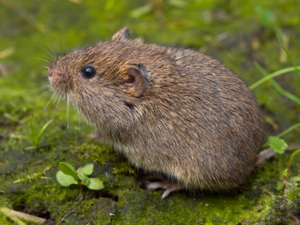 The two most common types of voles found in New Jersey are the meadow vole (Microtus pennsyvanicus) and the pinevole (Microtus pinetorum). The genus Microtus refers to the small ears of these animals.  Voles are small compact rodents resembling mice but with a stouter body, a shorter hairy tail, shorter legs, a slightly rounder head, and smaller ears and eyes. Their ears are partially hidden and their underfur is dense and covered with thicker, longer guard hairs. They are usually brown or grey, though many color variations exist.

The Meadow, Pine and Woodland Vole

The meadow vole is the most common vole species in New Jersey. Its total length, including tail, can range up to seven and on-half inches. Its fur is gray to yellow-brown with black-tipped hairs and a bi-colored tail. Pine or woodland voles are smaller voles, with a four to six inch total length. Pine voles have short reddish-brown fur.

Voles are commonly called meadow mice or field mice. While voles are excellent swimmers, they are poor climbers. They do not usually enter homes or other buildings. Meadow voles generally inhabit grassy areas and wet meadows while pine voles are usually found in deciduous and Pine forests with thick leaf litter or heavy ground cover. Most problems around homes and gardens occur during times of large meadow mouse populations. Voles become nuisance wildlife when they inhabit areas adjacent to buildings including gardens and landscaped sites with protective ground cover.

Voles usually live between 2 and 16 months with females maturing in 5 to 6 weeks.  Breeding occurs primarily in the spring and summer. They can produce up to 5 litters per year with each litter averaging 3 to 6 young. As such, voles have a high reproductive potential and under the right circumstances, a vole population can grow exponentially, which brings about the need for a wildlife removal specialist to intervene. Their home ranges usually are less than 1/4 acre and vary with season, food supply and population density. Population densities of voles can have large fluctuations from just a few voles per acre to populations in the hundreds per acre are common. Their numbers generally peak every 3 to 5 years. Factors that influence population levels include dispersal rates, food quality, climate, predation, physiological stress, and genetics.  In an extreme case in southern Oregon, the vole population was estimated to have reached 4,000 per acre.

Moles and Voles have more in common than rhyming names.

Although voles are rodents and moles are not part of the rodent family, the two animals share some commonalities besides having rhyming names.  Moles are “fossorial,” meaning that they are subterranean and live their entire lives underground. Voles are semifossorial creatures; they live part of their lives in underground habitats. Voles, like moles, construct many tunnels and surface runways with numerous borrow entrances. Meadow voles build a network of surface runways linked to underground burrows. Pine voles spend most of their time in a shallow tunnel and burrow system. Several adults and young may be found in a burrow network.

Voles can cause extensive property damage

As such, both moles and voles can cause extensive property damage through digging. However, without question, the mole is the king of underground tunneling.  Its unique anatomy and physiology is specifically designed for them to dig and live underground. No burrowing mammal can match the physical aptitude of the solitary subterranean mole.

Another commonality between a mole and a vole is their voracious appetite. A mole will regularly eat quantities up to 100% of their body weight daily; a huge amount of energy is required to plow and burrow. Similarly, a meadow vole can eat close to its own weight daily. While moles prefer earthworms, grubs, and insects, voles prefer plant material such as grasses and roots. Voles will also eat seeds, fruit, bark, insects, and underground fungi.

The most recognizable sign of meadow voles are surface runways that are 1-2 inches wide with numerous burrow openings. Feces and small pieces of clipped grass can be found in the runways. Vegetation of well-traveled runways will be clipped close to the ground. Pine voles do not use surface runaways like meadow voles. They construct a network of shallow tunnels that are more difficult to locate increasing the need for a vole removal specialist to take a look at the problem at hand.  Voles are more than capable of ruining lawns, gold courses, and ground covers.  Although most economic damage from moles is to crops especially orchards, homeowners are not immune from the wrath of these small, but destructive rodents.

Voles can cause significant tree damage

Their burrow and tunnel construction can cause damage to roots of plants and trees and wreck havoc to gardens.  Also, voles are herbivorous mammals that feed on plant bark. This causes tree damage known as girdling. Girdling, also called ring-barking, is the complete removal of a strip of bark from around the entire circumference of a branch or truck which then results in the death of wood tissues beyond the superficial damage. If the main trunk of a tree is girdled, the entire tree will die.  Girdling damage usually occurs in fall and winter. Although girdling and gnaw marks can be caused by other animals, vole gnaw marks are non-uniform, occurring at various angles and in irregular patches

Cowleys Pest Services has developed protocols from years of experience in resolving vole infestations.  First we start with exclusion, keeping the voles out. Wire or metal barriers can exclude voles from an area. Barriers can also be used to protect seedlings and young trees by burying the edge of the barrier to prevent underground access.

Habitat modification through eliminating weeks and ground cover is vital to reduce the availability of food and cover. Lawn and turf should be mowed regularly and mulch should be cleared 3 feet or more from the base of the tree. A vegetation-free strip is an excellent buffer around areas to be protected. Frequent garden tillage in the garden removes cover, destroys existing runways, tunnels, and burrows, and may eliminate a majority of the vole population.

There are various toxicants and anticoagulants on the market that can be used by a  licensed professional wildlife technician. New Jersey has strict laws on the legality of particular applications and ensuring that non-target species are not injured. These control methods should be limited to those experienced in their use.

Trapping large populations of moles is generally not cost-effective but can be used in controlling a small, local vole population or in the extremely rare case where a vole invades a home. In that case, we would capture the voles with the same protocols used for mice, trapping or baiting.