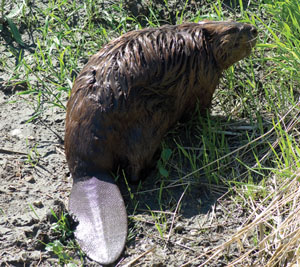 Every year there are about 100 complaints of beaver control problems throughout the state of New Jersey. Often, homeowners believe that they have a beaver living under their deck, and more often than not, it turns out to be a groundhog. To trap beavers, the wildlife removal technician must receive a special permit by the New Jersey Division of Fish & Game.

The beaver is the second largest rodent in the world. Fortunately, the largest rodent species, the capybara, which can weight up to 150 pounds, is native to South America and is not found anywhere in New Jersey. Adult beavers continue to grow throughout their adulthood and can weight over 55 pounds. The most distinguishing feature is its flat, wide scaly tail that resembles a paddle. It uses its tail for slapping the surface of the water to warn other beavers of approaching danger. When startled or frightened, beavers will rapidly dive while forcefully slapping the water with its broad tail.

There are plenty of Beavers in New Jersey.

New Jersey’s population of beavers is strong because they generally coexist well with humans and have few natural predators. One town, Knowlton Township near the Delaware Water gap, actually raised the level of the roads to cope with the frequent flooding caused by beavers and celebrate Beaver Day each spring with a parade.

Most other towns in New Jersey are not as accommodating to these large rodents. For the most part, homeowners who live near lakes, streams, and other bodies of water find that being busy as a beaver is not a good thing. Beaver control is a necessity since these creatures are known for their industriousness, building dams on rivers and streams and then building their homes, known as lodges, in the pond. They also build canals to float building materials that are difficult to haul over land. They have powerful front teeth to cut trees and other plants that they use for building and for food. Next to humans, no other animal appears to do more to shape its landscapes. With their powerful front teeth, they are capable of felling large, mature trees. Like all rodents, a beaver’s teeth will grow continuously so they have to keep gnawing wood to slow their growth.

Beavers cause damage and can contaminate the water.

The problem with all of this woodwork activity is that their dams and lodges block water flow, raising the water level and creating serious flooding hazards. Houses near lakes and streams where beavers have located can potentially experience significant water damage as the water from the pond, lake, or stream creeps toward their house. In addition to damage caused by flooding from beaver activity, beavers can threaten human health by contaminating the water with a microscopic parasite called Giardia lambia. This parasite caused Giardiasis (“Beaver Fever”) a diarrheal infection of the small intestine that can lead to serious health issues.

Cowleys Pest Services offers homeowners complete wildlife removal solutions to dealing with a beaver problem. Even just a couple of beavers, if left alone, can cause an incredible amount of damage. They are like living wood chipper machines. Culvert protective fences and pond-leveling pipes are often cost-effective solutions to counter future flooding problems. Cowleys Pest Services can safely and humanely trap and relocate any beavers that are causing problems on your property. Call or contact them today for your beaver removal needs. We service homeowners in New Jersey throughout Mercer, Ocean, Monmouth, Somerset, & Middlesex County.