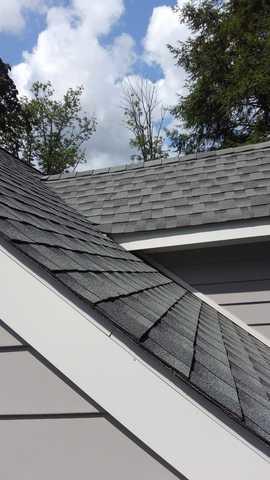 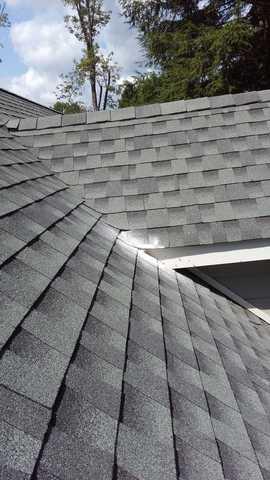 Recently, I was dispatched to a residence in South River, NJ. The homeowner was having a problem with yellow jackets. These wasps with their distinctive yellow-black coloration are one of the most territorial, aggressive stinging insects we come across. They seem almost anxious to sting at the slightest provocation.

Although yellow jackets often nest outdoors in rodent burrows and other cavities, sometimes they decide to build nests inside homes. Decks, eaves, soffits, gutters, and even holes in brick are all potential yellow jacket nesting sites. Here, the wasps found an opening of a roof dormer soffit. The homeowner realized he had a problem because he was hearing buzzing and light scratching/clicking sounds in his upstairs ceiling. These wasps, as many wasp species, will chew on wood because cellulose makes for great nesting material. They are powerful enough to chew through drywall. These were some of the sounds that the homeowner was hearing. By the way, don’t knock on the drywall. It may be so paper thin that you’ll make a hole in it!

Upon arrival, I immediately inspected the exterior and observed yellow jackets entering and exiting the dormer soffit. I also saw a paper hood protruding out of the soffit that was clearly part of their nest. Yellow jackets build paper nests that are completely surrounded by a paper envelope. This paper-like pulp is a mixture of chewed wood fibers and their saliva. Inside, I inspected the upstair ceiling and found that the moisture from the nest had soften the sheetrock.

It was time to treat the nest. Because of the aggressive nature of these wasps, i don’t take any chances. I put on my protective suit with a hat and veil to protect me against any insect stings. When yellow jacket nests are first treated, you are often “greeted” by a swarm of angry, aggressive wasps. A individual yellow jacket can sting multiple times, so f a nest is disturbed you can be facing dozens of painful stings. For obvious reasons, active yellow jacket nests, especially those built in challenging locations, are not DIY homeowner projects.

I climbed on the roof and used an extension pole sprayer so I could keep as safe a distance as possible from the nest, and injected a dust into the soffit opening. The dust will be shared with all of the members of the nest and it won’t take long for the queen and the rest of the colony to be eliminated.