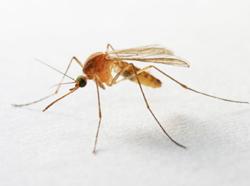 Mosquitoes in the U.S. have gone from being an irritating nuisance to downright concerning. Mosquitoes often prevent us from enjoying our backyard or a night outdoors here in New Jersey. Now these nuisance blood suckers are making the nightly news as known carriers (vectors) of a plethora of infectious diseases including Zika, West Nile Virus, Dengue, Chikungunya and more. At the time of writing, Zika is most concnering and is believed to cause microcephaly, an underdeveloped brain and head, in unborn children. Our government tracks disease transmission to help protect public health since, in other parts of the world, mosquitoes can actually transmit some of the deadly diseases causing millions of deaths each year.

Mosquitoes are narrow, oval shaped insects that are usually between 1/4 - 3/8 of an inch long. They have long thin legs and wings; like all true flies, mosquitoes only have two wings. Their color varies but typically they are mostly gray with white, silver, green or iridescent blue scales. A new species, the Asian Tiger Mosquito, has infiltrated New Jersey. The Asian Tiger Mosquito is smaller, typically about a quarter of an inch long and black and white in color. Unlike most other mosquitoes, it remains active and bites throughout the day and not just at dusk and dawn.

Like beetles, butterflies and moths, mosquito’s life cycle includes four distinct stages: egg, larva, pupa, and adult. Mosquito eggs are deposited in still water and need approximately a week to hatch. When the eggs hatch the larva swim immediately. The larva eat and grow, which allows them to transform into a pupa. The pupa is also aquatic. The pupa doesn't grow, instead the pupa phase is considered a resting stage while the mosquito transforms into the adult stage. Mosquitoes finally fly in the last stage, the adult stage.

In order for mosquito larvae to grow, they need still freshwater or slightly salty water. Adult mosquitoes often can be found near where mosquito eggs are laid. There are approximately 2,500 mosquito species worldwide and different species can be found in different kinds of water. Most commonly, mosquito larvae grow in ponds, puddles, swamps, untreated pools, saltmarshes, or any area where water is stagnant like bird-baths. Although mosquito species are most abundant and diverse in humid habitats some species can even be found in the arctic tundra.

Mosquitoes are only able to feed in two of the four stages of their lifecycle: when they are larvae and when they are adults. Although mosquitoes are well known for consuming human blood, that is not the only food they consume. In fact, the larvae as well as adult males do not feed on blood at all. Adult males feed on nectar. Adult females feed on both nectar as well as blood.Female mosquitoes hunt for the blood of humans, other mammals, birds, and amphibians by detecting body heat and carbon dioxide emissions.

Mosquito larvae eat many things. They are known to graze over rocks and plant material in the still water where they live. This action helps to remove algae and bacteria from the water around them. Mosquito larvae can survive in polluted water, but if scum develops on the top of the water in which they live they will die. The larvae must have contact with the air through the siphon at the end of their abdomen.

It is common for mosquitoes to be active between dusk and dawn, when the air is calm; but there are some mosquitoes that will feed at any time of day. Generally, mosquitoes prefer a warm, moist environment which is why they are active from early summer until late fall here in New Jersey. Unlike some other animals, mosquitoes do not have territories, but often stay close to a body of water where they can lay eggs. Mosquitoes are solitary creatures that only come together to mate. Even though mosquitoes are solitary, since many stay near bodies of water, it is not uncommon to see clouds of thousands or millions of mosquitoes at one time.

When mosquitoes want to find each other in order to mate, they are able to do so by scent and by the sound of their wing vibrations. When looking for animals to feed on, female mosquitoes can also sense heat, moisture in the air, and the breath of animals. Once a mosquito has found a suitable person or animal, they will pierce the victim’s skin with their proboscis. They will draw blood out while they inject a chemical that helps to keep the victim’s blood from clotting. It is believed that mosquito bites itch because of the way the human body reacts to the injected chemical. This is also how diseases are transmitted from one person to the next by mosquitoes.

Fish and predatory aquatic insects eat mosquito larvae and pupae. When mosquitoes are in the larvae and pupae stage they float with very little movement in order to trick their predators into thinking they are simply bits of debris. They will wiggle and swim away from danger if they have to.

Once mosquitoes turn into adults, they are the prey of bats, birds, and spiders. Adult mosquitoes are adept flyers and can fly quickly to try to dodge away from danger. Some scientists believe that they often try to bite at night or dusk so they are harder to see by predators.

Mosquitoes have a great number of health concerns associated with them that far outweigh any good that they do.It is believed that worldwide mosquitoes cause more harm to humans than any other group of insects because they carry so many deadly diseases.Mosquitoes are vectors of Zika, malaria, yellow fever, dengue fever, encephalitis, and West Nile virus as well as many other lesser-known diseases. Most recently, Zika has become a great concern, especially to pregnant women. It is believed to cause microcephaly, an underdeveloped brain and head, in unborn children. West Nile virus is also here in New Jersey. Mosquitoes can become infected with the virus when they feed on birds that have the virus in their blood stream. Once a mosquito becomes infected it can pass the virus along to another human or mammal through its bite. The symptomsof West Nile virus are similar to those of the common flu but in extreme cases, symptoms include high fever, head and body aches, worsening weakness, confusion, and even coma.

At the time of writing, officials do not know if Zika will spread through New Jersey’s mosquito population or whether a West Nile Virus or Dengue outbreak will occur. It is always wise to take precautions from mosquito bites nevertheless. Homeowners can take steps to control mosquito populations around their property. Eliminating areas of standing water is one of the most important steps a person can take to control mosquitoes. Standing water can often be found in clogged gutters, flowerpots, birdbaths, grill covers, baby pools and in as little water as can accumulate in a water bottle cap. Fountains, ponds and ornamental water fixtures can be treated to prevent mosquitoes from breeding in them. Pools and hot tubs should be properly cleaned and chlorinated. A licensed pest professional can also help to reduce mosquito populations by treating properties.