The Difference Between Moles & Voles

Although the pronunciation of their names does sound similar, I assure you, there is a vast amount of difference between moles and voles.

What you may not know is that moles are NOT rodents. They are carnivores subterranean mammals called insectivores since their diet consists of arthropods like grubs, earthworms, and beetles. It may appear that they don't have any eyes or ears, but that's because both are concealed by their fur (they do not have external ears, however). They do have a pointed snout and large feet with sharp claws for digging.

Tunnels dug by moles are deep, at least ten inches underground. They are most active in the early morning or evening in the spring or fall and they also come out after warm rain. When you see a series of 3 -to-5-inch round, raised ridges breaking the surface of your lawn that is accompanied by tiny dirt volcanoes, you know you have moles tunneling below ground! Surface tunnels can be as shallow as three inches and are used when looking for a mate and when surfacing.

Voles are rodents, and closely resemble mice (in fact, they are also called field or meadow mice). They are active day and night, year-round, and their diet consists of plants, especially grasses and seeds, as well as bark, and crops. They have rounded ears and body and are reddish or brown and black in color with a gray underside.

You’ll know voles by the shallow snake-like tunnels that you’ll see all over your lawn. The tunnels are about two inches wide and very near the surface so they can eat their favorite food, grass stems, and blades. Voles construct tunnels with numerous burrows entrances.

Article: Voles & The Damage They Cause
Article: Moles: What Are They & How to Search for Them 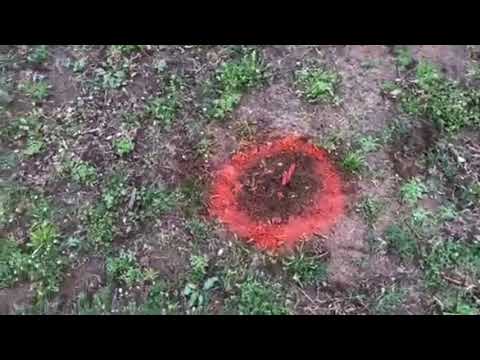 Tracking Moles With the Help from Robins in...
Recently, I received a call from a residential client of ours in Middletown, NJ who had an issue with moles... Watch Video
Back to Previous Page
Back to News & Events