How Air Movement in Your Home Can Lead to Mold, Rot, and Damage 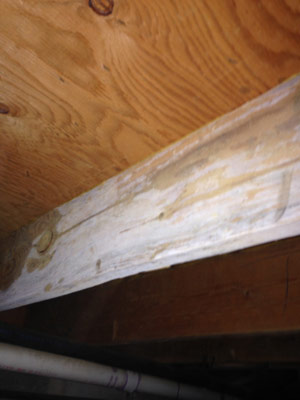 Crawl spaces have a well-deserved reputation for being damp, dank spaces. Even homes that have no groundwater flooding issues and trouble-free plumbing can have, crawl spaces plagued by moisture issues.

One major culprit for your home’s humidity is the phenomenon known as the "stack effect," the process by which hot air leaves the home through your attic and upper levels. As it does, a vacuum is created below, pulling new air upwards through the basement, crawl space, and lower levels.

Because of the stack effect, we know that air enters the home through the lower levels, moves upwards through the home, and exits through the upper levels. But what happens when the outside air replacing the exiting air is being pulled into the basement or crawl space through vents or other openings? The answer to this question lies in what’s known as relative humidity.

Since crawl spaces are naturally cooled by the surrounding soil that keeps a fairly constant temperature year-round, any air that enters that space from the outside will be cooled as well. This can cause a condition where the relative humidity leads to moisture formation. It is helpful for homeowners to have a general understanding of how relative humidity affects a crawl space in order to protect their home and family. And you don’t need a course in meteorology to learn the basics.

Now, let’s introduce your crawl space or basement. Picture that humid summer air moving into your crawl space or basement. This cool, underground space drops the temperature of the air, let’s say, to 68 °F (20 °C). Because the air “shrinks,” its relative humidity goes up, even if no new water is added to the air. Scientists know that for every 1 °F the temperature drops, the relative humidity of the air rises by 2.2%.

In this case, since the air temperature has dropped by 12 degrees, from 80 to 68 degrees Fahrenheit, the relative humidity will rise by 26.4% (12 °F x 2.2%). Add the 80% humidity you already had, and now you have 106.4% relative humidity. However, when the humidity reaches 100%, the air can hold no more water! So this extra humidity is dropped from the air as condensation. Little water droplets, which are like fertilizer for mold, are deposited on cool surfaces in the space, such as wood, metal, or concrete.

Mold needs moisture to survive, and it draws this humidity from the air around it. As the relative humidity in your basement or crawl space rises above the baseline of 70%, mold will live, thrive, and survive in the space.

As mold reproduces, it releases millions of microscopic allergenic mold spores into the air. Because of the stack effect, these mold spores will not be confined to crawl space. As air moves up from these spaces into your home, it will bring mold spores and humidity along with it. If you notice that you or a family member is suffering from symptoms such as a runny nose, watery eyes, mild allergic reactions, a scratchy throat, fatigue, or headaches at home, mold allergens may well be the culprit.

Besides your health, mold and rot will also wreak havoc on your home. Damaged wood, structural issues, and ruined personal property are all consequences of mold, mildew, rot and humidity in a basement or crawl space.

It is all too easy for crawl spaces to develop a moisture problem. Moisture has no trouble finding its way into your crawlspace. The most obvious water problem is bulk water. This is standing water that you can see and wade through. You don’t need to be a home inspector to know that visible water in your crawl space spells trouble. If there is visible water, there is a drainage problem or plumbing leak that needs to be fixed. Of course, any bulk water problems must be fixed before encapsulating.

However, there are other moisture sources that are subtler and more insidious than bulk water. These are the ones often missed by homeowners. These are conditions in which moisture stealthily builds up over time without any bells and whistles going off.

The first “quiet” way moisture accumulates in the crawl space air is by evaporation. Significant moisture exists in soil - and that moisture escapes into the air through evaporation. Soil may seem dry - but that’s because the water has already evaporated!  Soil is filled with moisture. Think of how the ground turns into a sponge whenever it rains. That’s a normal part of nature. Without moisture in the soil, most plants and trees would die. And it’s not just the ground -- even foundation walls retain water and can evaporate moisture.

The other sneaky way moisture enters crawl spaces is when hot, sticky outdoor air filled with moisture enters through crawl space vents.  Hot humid air cools down after entering r a crawl space.   Since cool air cannot hold as much moisture as warm air, the crawl space air approaches its saturation point: water vapor changes into liquid water and relative humidity skyrockets. And this is exactly what mold and fungi need to grow and thrive.

To stop high relative humidity in crawl spaces, you need to stop the moisture at its source -- whether it is from the ground (evaporation) or from the air (outdoor air entering the vents). The only way to block dangerous moisture is through crawl space encapsulation. Once your crawl space is sealed, enclosed, and confined, moisture and all of the problems that go with it are history.