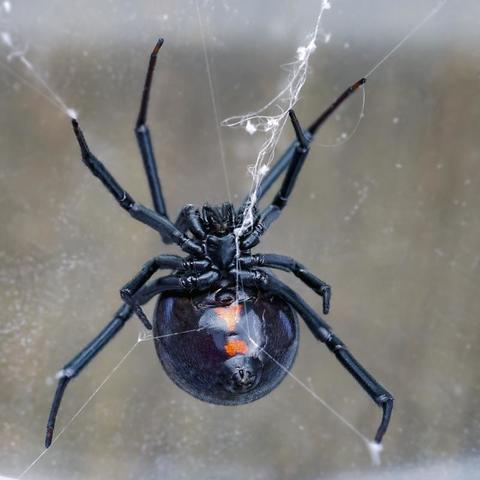 Ah, the dreaded black widow spider, infamously known from the popular belief that the female eats the male after mating. What may shock you is, that is a phenomenon that rarely happens in nature!

Black widow spiders are usually black in color and are most recognized for the red hourglass shape on the underside of their abdomen (occasionally, the females are brownish-black). They are approximately 3 to 10 mm long, and the females are larger than the males. Being that they are arachnids, they have eight legs. Young black widow spiders are primarily orange and white but acquire more black color as they mature.

Although deaths from black widows are rare, their venom is approximately 15 times stronger than a rattlesnake’s! Male black widow spiders rarely bite, but the females may bite in defense (especially after laying eggs). Their bites can cause a victim to have a high fever, increased blood pressure, sweating, difficulty breathing, and nausea. Pain is usually almost immediate and reaches its maximum in 1-3 hours. The worse part is that the pain may continue for one to three days after the bite!

They are primarily active when the temperature is 70 degrees or higher, however, with the right conditions, they can survive in lower temperatures. Their diet consists of arthropods, such as ants, cockroaches, scorpions, and beetles. They favor dry, dark locations to spin their webs, and when outdoors, they reside under stones, decks, firewood piles, and hollow tree stumps. They prefer cluttered areas that offer more harborage for their prey.

Their eggs sacs can be recognized for their grey and spherical appearance, and are generally around 9.5 mm in diameter with a conspicuous notch on the top. Each egg sac contains an average of 255 cream or yellow-colored eggs, and each female is usually in possession of 10 egg sacs.