Squirrels are a common sight in our New Jersey yards and parks. Here in the Garden State, the most common squirrel is the eastern grey squirrel; however, red squirrels and southern flying squirrels can also be found throughout the state. While the natural habitat of eastern grey squirrels are the expanses of mature, mixed forests, they are able to adapt easily to a variety of surroundings, and as such, they are found in human habitats from the most populous cities to rural areas and suburbs.

The activity patterns of eastern grey squirrels depend on the season of the year. During the spring, summer, and autumn squirrels try to avoid the heat of the day, so they are most active for approximately two hours after sunrise and then again for a two- to five-hour period before sunset. They are less active during the cold winter months, usually limiting their activity for two to five hours before sunset. In general, female squirrels are more active in the summer months while males are more active in the winter months.

Much like their activity, the level of their territorial behavior seems to change with the seasons. Generally, related squirrels defend a particular territory. A squirrel’s home range is commonly larger in the summer. The larger the home range, the fewer squirrels in that area. With squirrel territories, the fall is sometimes referred to as the “great reshuffle” because this is the time of year when juvenile and adult males change territories, which is necessary for a healthy gene pool. 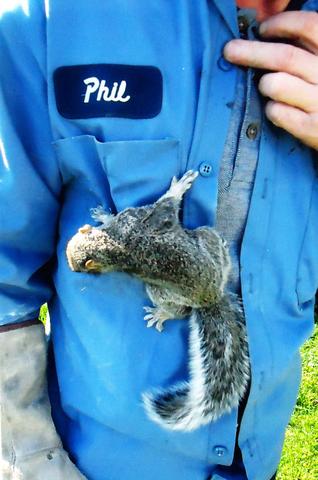 are medium-sized squirrels, with their total length ranging from approximately fifteen to twenty inches. Their tails extend about another are seven and one-half inches. Both males and females are similar in size and weigh about the same, a little more than a pound.

Squirrels are rodents, having four front teeth that never stop growing. To keep them from getting too long, the squirrel must constantly gnaw, and if they do not properly gnaw down their teeth, they cannot eat. This incessant gnawing poses a serious danger to having squirrels that have taken up residence in a home. Squirrels can cause extensive property damage, both inside and out, and can also trigger an electrical fire by gnawing on and exposing electrical wires.

Eastern gray squirrels are omnivores. The majority of their diet is made up of nuts, seeds, flowers, and buds of trees. They also eat a variety of plants without woody stems and fungi. Insects are eaten in the summer, and are especially important for young squirrels. Less often, squirrels will attack crops, such as corn and wheat and will eat bones, bird eggs, nestlings, and frogs. Female squirrels are more likely to search out high protein food, such as eggs, when they are pregnant and nursing. Squirrels get most of their sustenance from maple, mulberry, hackberry, elm, and dogwood trees. They also eat seeds from cedar, hemlock, pine, and spruce trees.

In the fall, squirrels will often bury their food for later use during the winter using a method called scatter hoarding, where they hide a large number of small hoards (following that old saying, don’t put your eggs in one basket). In the winter they locate their food by using both memory and smell. Scatter hoarding plays an important part in seed dispersal. Although squirrels do have a good sense of smell and memory, some nuts and seeds will not be found. When left uneaten, they will have a chance to germinate, enabling plants to more effectively spread.

While squirrels get water from the food they eat, in almost all situations, they need to drink water as well. In forested areas the common water sources are streams, ponds, puddles, and water collected in tree holes. Where squirrels have adapted to human-inhabited areas, they use water sources like bird baths and gutters.

There are many animals that prey upon eastern grey squirrels including red foxes, coyotes, birds of prey (like red-tailed hawks), as well as domesticated animals such as cats. When squirrels sense a predator, they will emit warning calls to warn others. Fortunately for squirrels, their extreme agility in the trees makes them difficult to capture.

Like many other animals, the male squirrel competes with other males to mate. Eastern grey squirrels use a polygynandrous mating system, the same mating relationship used by gorillas, where multiple males and females have an exclusive relationship, and female squirrels can mate with more than one male.

After the squirrels mate, there is a forty-four day gestation period. Most females begin to reproduce when they are a little over one-year old, however some are able to bear young as early as six months of age. They are able to reproduce for more than eight years. Males usually reach sexual maturity around one year of age, but when housed with dominant males their sexual maturity may be delayed by up to two years.

Squirrels normally have two litters per year, one in late winter and the other in the midsummer. The litters usually consist of two to four pups, but up to eight young per litter is possible. When females are pregnant or lactating they nest alone. During these times females are known to be very aggressive and other squirrels generally avoid them.

Squirrels normally nest outside in one of two kinds of dens, a permanent tree den or a nest of leaves on a tree branch thirty to forty-five feet above ground. Unfortunately, some squirrels choose to make dens in residential homes, which can cause significant problems. Squirrels can chew wires, which can cause fires, and chew wood, which can lead to structural damage. Squirrel droppings are also a problem because they can spread diseases like Leptospirosis and Salmonella.

To help reduce the chance of squirrels using homes for their dens, homeowners should prevent access to the roof by pruning any tree branches that come within twelve feet of the roof. They should also replace loose or rotting wood. Bathroom, stove, attic, and dryer vents should be screened. Potential access points should be inspected regularly to ensure that they have not re-opened.