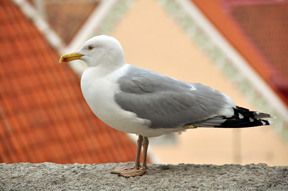 Gulls are abundant and boisterous birds. Living in a coastal state, most New Jerseyans and Mid-Atlantic residents are well aware that we have more than enough “seagulls” to go around. The name “seagull” is a bit misleading because virtually all of the New Jersey species are birds of the coast and estuaries rather than of the open sea. Gulls can be found miles inland from the shore; they range from mid-ocean to the Great Plains to any parking lot. They will congregate wherever water and land meet or food abounds. The herring (Larus argentatus) and ring-billed (L. delawarensis) gulls are the two most common and widespread of the species in New Jersey and the Mid-Atlantic. The ring-billed gull, most commonly seen inland, can be found in virtually every location, from plowed fields to parking lots and fast-food outlets to golf courses and country lakes.

Gulls, in general, are medium to large birds, typically grey or white and often have black markings on their head or wings. Gulls are robust birds with webbed feet, long wings, and a slightly hooked beak. They all possess an exceptional flying ability. They are often seen swimming and occasionally dive underwater. Adult gulls are white, with varying patterns of gray and black over the back, wings, and head.

In 2012, thousands of gulls took over the rooftops of a New Jersey townhouse development in Tinton Falls forcing children to carry umbrellas on sunny days to protect themselves against bird droppings while waiting at the bus stop. A Monmouth County landfill is less than a quarter-mile away, and many of the estimated 7,000 gulls at the landfill decided to find a new home. Rooftops were splotched with droppings, small animal bones littered patios, feathers were everywhere, and children who used the play wound up with dropping residue on their clothing.

Gulls are scavengers with ravenous appetites that feed on land or water. They feed on fish, insects, worms, and small vertebrates, such as field mice and ground squirrels, plant remains, carrion, and refuse. They frequently take the eggs and young of other nesting seabirds and are not above stealing food from other birds. Gulls are very agile flyers and easily catch bits of food tossed into the air.

Increasing gull populations in New Jersey have led to a variety of problems. Gulls may cause damage to agricultural crops and threaten human safety at local airports. They are involved in more collisions with aircraft than any other bird group. The presence of gull roosts near reservoirs increases their potential for transmitting diseases to human populations. Seagulls occasionally cause a nuisance when they nest on rooftops where they leave prodigious and unsightly droppings. Gulls are predators of several seabirds during the breeding season. Expanding and colonizing gull populations may have detrimental effects on the breeding performance of these other, often preferred species.

What can Cowleys Pest Services do to Resolve Your Gull Problem?

Gull control is about keeping unwanted, nuisance gulls from landing, roosting, and nesting on structures using various deterrents. Bird deterrents may be physical, visual, or auditory. In urban and suburban settings, physical barrier deterrents are the most effective and practical long-term solution for gulls. Each solution must be designed to resolve the particular gull infestation at hand. Factors that must be assessed include the type of structure and the level of bird activity. In addition to choosing the right mix of deterrents, a proper installation by an experienced bird control specialist is essential.

Cowleys Pest Services will make your home or building an inhospitable area for gulls to land, roost, or nest with our bird control services. The objective is to have the gulls take themselves and their droppings to another, friendlier location. Once there is no longer enough real estate on your ledges and other areas to conduct their activities the nuisance birds get the message loud and clear that your structure is an undesirable habitat for them.

Gulls are classified as migratory species and thus are protected by federal law. Gulls may be taken only with a permit issued by the US Fish and Wildlife Service. Permits are issued only after frightening techniques, physical barriers, or both have been used correctly and qualified personnel certify that these methods have been ineffective