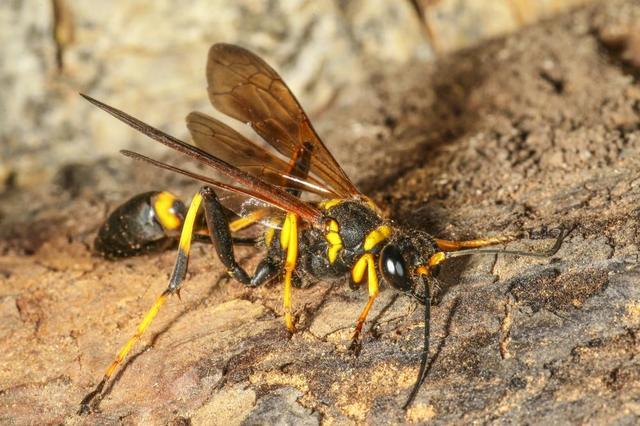 Mud daubers are solitary insects, meaning they are not social and do not live in colonies, that are about ¾ to 1 inch in length and can vary in coloration from all black, blackish blue, or black with yellow markings. There are many species of wasps referred to as mud daubers, such as organ pipe mud daubers, black-and-yellow mud daubers, and blue mud daubers. The most common mud dauber species found in New Jersey are the pipe organ mud dauber that builds pipe-shaped mud nests in protected areas such as on walls, under eaves, or in attics.

Mud daubers have a “thread-waisted” body, meaning there is a long, slender segment between the thorax and abdomen. Mud daubers also possess clear or dark wings. Although they aren't aggressive and are unlikely to sting, care should be still be taken in the presence of an abandoned mud dauber nest, as other, more aggressive insects may take it over.

The shape of the mud dauber nest is a key indicator of the wasp group. For example, female black-and-yellow mud daubers will construct their nests of many short mud tubes measuring about 1” (25 mm) long that are built side-by-side. On the other hand, the organ pipe mud dauber constructs a nest comprised of many long mud tubes (20+ cm) that resemble pipes on a pipe organ. In general, most mud daubers will select a new site to build a nest for each generation.

According to the National Pest Management Association, Mud daubers pass through four stages during their lifecycle – egg, larvae, pupae (cocoon), and adult. Depending on the species, they complete one or two generations per year, and in the spring, overwintering pupae develop into adults. The new adult females will construct nests comprised of mud tubes of varying sizes. Each mud tube is provisioned with several chambers that the female mud dauber catches and paralyzes with her venom.

The female mud dauber deposits an egg on the first chamber within each mud tube and then seals them with mud. The mud dauber larvae will hatch from the eggs and feed on the prey left behind by the adult female mud dauber. Then, about three weeks later, the larvae will develop into pupae and will spin a silk cocoon to overwinter until the following spring when they become adults. Adult mud daubers feed on plant nectar, honeydew, and body fluids from the spiders they capture.

Article: Cowleys Shares the Essential Role of Pest Professionals During National Pest Management Month
Article: Is Bat Guano Dangerous?
Case Study: How Mice Got Into the Basement in Beachwood, NJ
Case Study: Pavement Ants Found in Pool House Pump Room in Freehold, NJ
Video: Ants Found in the Mulch in Far...
Video: Treating a Property for Ants in...
Back to Previous Page
Back to Technical Papers