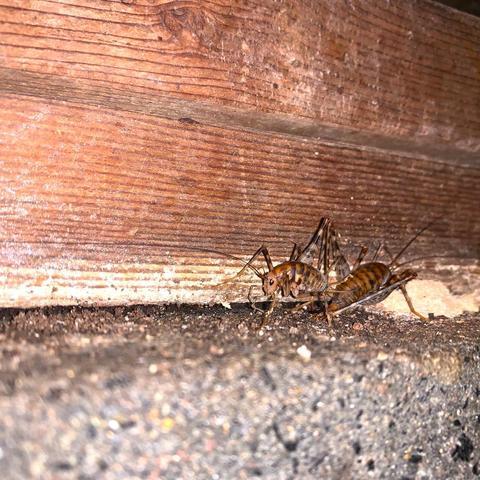 Camel crickets, also known as cave crickets or sprickets, get their name from their humpbacked appearance, which resembles a camel. They are commonly found in caves, as well as damp, cool areas underneath damp leaves, stones, and rotting logs. In homes, the most popular areas they like to invade are basements and crawl spaces (because they are dark and moist).

Camel Crickets do NOT bite, as they have no fangs, nor do they pose any health risks to humans. In fact, their only means to defend themselves is the ability to jump really high to scare off predators. Contrary to popular belief, they are not related to the arachnid family at all. Many people call them "sprickets" because they look like a cross between a spider and a cricket.

Camel crickets are light to dark brown in color and have large hind legs and a lengthy set of antennae that helps them navigate dark environments. They are nocturnal and hide during the day. When it becomes hot and dry outside, camel crickets may move inside as they struggle to reproduce outside of their preferred dark and damp environments. They often overwinter as young nymphs or adults, as camel crickets have the ability to live without sufficient food sources. For food, camel crickets consume wood, carpet, fungi, cardboard, other insects, and even other camel crickets in some instances.

How to Prevent a Camel Cricket Infestation

The most effective way to prevent a cave cricket infestation is to reduce areas of moisture in and around the home. Proper installation of a dehumidifier is a great way to prevent moisture buildup indoors. Also, seal all possible points of entry around the house, keep crawl spaces, basements and attics well ventilated, and store firewood at least 20 feet away from the house.