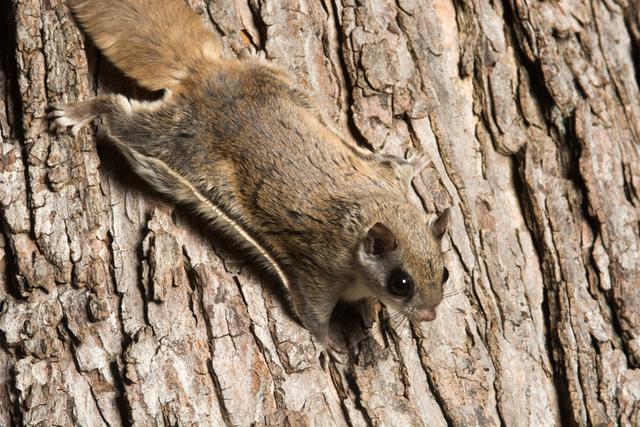 Southern Flying Squirrels are smaller than the other species of flying squirrels living in North America. They are approximately 8 to 10 inches long and weigh about two and a quarter ounces. They have large eyes and small ears with excellent senses of hearing, vision, smell, and touch. Their large eyes help them to see at night and the whiskers on their chin, cheeks, and ankles help them navigate tree trunks in the dark. Southern Flying Squirrels have gray-brown fur on their backs while their belly fur is all white. Both males and females of the species have the same coloring.

Flying squirrels are easily distinguished from other animals by their gliding membrane, also known as patagium. The Patagium is a fur-covered flap of loose skin that connects their front and back legs from extensions in their wrists and ankles. The design of this skin allows the squirrel to glide through the air between trees. Although their name would suggest that flying squirrels are able to fly, in fact, they are only able to glide through the air. A flying squirrel can travel to another tree without touching the ground by launching itself from a high branch, spreading out its limbs to expose its gliding membrane, and then gliding from the higher branch to a lower branch on another tree. The squirrel is able to steer by making slight changes in the position of its legs; the tail acts as a brake when the squirrel reaches its destination. The flying squirrel can cover a large area during its glide; they are able to cover more than 150 feet in a single glide.

Southern Flying Squirrels are omnivores that have a very varied diet. Their diet includes acorns, nuts, berries, seeds, leaf buds, bark, fruit, moths, Junebugs, eggs, young birds, young mice, insects carrion (the flesh of dead animals), and fungus. They are especially fond of hickory nuts and acorns. One sign of the presence of flying squirrels in an area is a pile of gnawed hickory nuts at the base of a large hickory tree. Southern Flying Squirrels, like the common Grey Squirrel, store food for winter. They begin storing in late summer in their nests, the ground, and in and around trees. These stored foods form an important part of their winter diet. The seeds of conifers are another source of winter nutrition. If Southern Flying Squirrels live near humans they will often take advantage of the seeds in bird feeding stations.

Southern Flying Squirrels typically mate twice a year during the warmer months, from May to September. Squirrels that live in the southern part of the United States tend to give birth to their young earlier than those in the northern parts of their range. The squirrel’s gestation period is 40 days. After the gestation period, they give birth to one to six young at a time; on average the litter consists of three kits. Young flying squirrels weigh approximately 0.1 to 0.2 ounces at birth. They are furless, pink, and blind. Their ears open when they are two to six days old. They start to develop some hair at seven days old. At around 28 days they open their eyes; weaning occurs between the thirty-fifth and forty-second day. By the time they are weaned, the young squirrels are fully furred and nearly the same size as an adult. Mothers care for their young in the nest and nurse them for 65 days; this is a significantly longer amount of time than most animals this size.

Since flying squirrels are mainly active at night, their most common predators are owls, hawks, tree snakes, and climbing mammals such as domestic cats, bobcats, and raccoons. Although the squirrels are often caught, they do have a very important escape mechanism, their ability to glide. Flying squirrels are great escape artists. They can glide from one tree to the next and once they land on a tree trunk, they promptly hurry to the other side of the trunk to avoid being spied by their predator. Due to the abundance of natural predators, the average wild squirrel lives approximately five years. However, in captivity, they are known to live up to ten years.

Southern Flying Squirrels live in deciduous and coniferous forests. In the wild, they make their homes in woodpecker holes and abandoned nests of birds and other squirrels. Unfortunately, like mice and grey squirrels, the Southern Flying Squirrel has found that man-made structures prove to be a good place to create nests. It is not uncommon for flying squirrel nests to be found in unfinished attics.

The nests made by flying squirrels are made of soft materials like shredded bark, dry leaves, moss, feathers, and fur. These squirrels are normally solitary or live in small family groups, but in the winter, especially in the northern parts of their range, they come together in communal nests of 10 to 20 animals. It is thought that they do this in order to keep warm. They can often be found huddling and snuggling in these large nests. However, during the breeding season, females are territorial and keep other females out of their area.

Although illegal in some states, flying squirrels are kept by some people as exotic pets. However, like mice, choosing to bring an animal like that into your home is very different than having them decide to use your home as a nesting area. Like mice and common grey squirrels, flying squirrels enter homes through small holes in vulnerable areas such as around dormers, ridge vents, eaves, and attic vents. Any holes that are found in an attic should be closed to prevent squirrels and other animals from entering. However, before you close any hole it is important to be sure that no squirrels are trapped inside the home.

It is important to keep flying squirrels out of attics, closets, and between the walls of a home because they can cause significant damage by chewing walls, wires, insulation, and siding. Once they have made a nest, squirrels will chew on the insulation around wires; this habit is particularly dangerous as the exposed wires may cause a fire. Flying squirrels are also known to travel along power lines to get to attic areas an act that may short out transformers.

Case Study: Siding Chewed by Squirrels in Lanoka Harbor, NJ
Case Study: Ants Trailing Along the Back in Freehold, NJ
Video: In Ground Yellow Jackets Nest...
Video: Bald-Faced Hornets Nest Close to...
Photo Gallery: Squirrels Chewing Their Way Into the Attic in...
Photo Gallery: Ants and Mold Found in Commercial Facility in...
Back to Previous Page
Back to Technical Papers