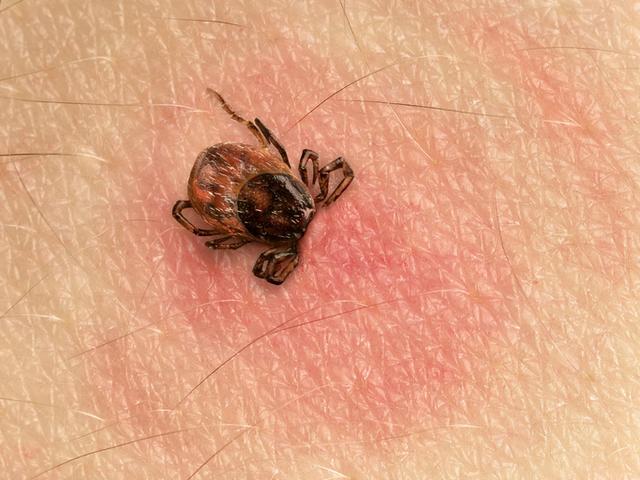 Animals, from insects to mammals, can be vectors for disease. Some diseases transmitted by pests can cause minor irritation whereas others can be debilitating and even deadly. Although many animals transmit disease, some of the most common transmitters of diseases are ticks, mosquitoes, mice, and flies.

Ticks are relatively small arachnids in the order Parasitiformes. Ticks are parasitic animals that ingest the blood of mammals, birds, and reptiles. The Centers for Disease Control and Prevention (CDC) recognizes more than a dozen tick-borne illnesses in the United States. In the Northeastern section of the United States, one of the most common tick-borne illnesses is Lyme disease. Lyme disease occurs when an infected blacklegged tick bites a human and transfers the bacterium Borrelia burgdorferi into the person’s bloodstream. The typical symptoms of Lyme disease include, but are not limited to, fever, headache, fatigue, and a characteristic skin rash called erythema migrans that is commonly referred to as a “bulls-eye” rash. If Lyme disease is not treated promptly the infection can spread to a person’s joints, their heart, and their nervous system. Many, but not all, cases of Lyme disease can be treated with a course of antibiotics but researchers still believe that prevention is incredibly important.

It is a common misconception that ticks are only found in highly wooded areas. In fact, research shows that approximately seventy percent of Lyme disease cases come from tick bites that occur in a person’s backyard. There are three steps that can be taken to reduce the number of ticks in an area. The first is to make the area inhospitable to ticks by keeping lawns mowed, trimming overhanging shrubs, and removing leaf litter. Ticks are often brought into an area on a host animal, so keeping host animals like rodents, bats, and deer out of a yard can decrease the number of ticks. Lastly, tick populations can be significantly reduced by using a low environmental impact tick treatment.

Mosquitos are small, oval-shaped insects that have long thin legs and wings. Male mosquitoes feed off flower nectar, however, female mosquitoes require blood meals in order to develop and lay eggs. When female mosquitoes insert their proboscis into a human or animal in order to draw blood they can contaminate the host’s bloodstream with a number of diseases. Two of the diseases of importance that are transmitted by infected mosquitoes currently are the Zika virus and the West Nile virus.

The West Nile Virus (WNV) is spread by a number of different species of mosquitoes, some of which are able to live in the cooler climates of the Northeastern section of the United States. The WNV has some symptoms that are similar to the Zika virus, including fever. Although some people will contract WNV and have no symptoms at all, in approximately one percent of the cases WNV is fatal.

Mosquito prevention is key in protecting people from mosquito-borne diseases. Mosquito control should be practiced by individuals in addition to the efforts of government entities. Individuals should eliminate standing water from their property by checking flowerpots, birdbaths, grill covers, and baby pools for excess water. If water is found it should be dumped frequently. Individuals may also choose to have their properties protected by a professional mosquito defense program. Homeowners should be wary of over the counter chemicals that claim to kill mosquitoes because they could have detrimental effects on other beneficial insects. The right professional will use one of the environmentally safe programs that are available.

Unlike ticks and mosquitoes that must bite someone to transfer a disease, rodents are able to transfer diseases to humans through bites as well as contact with their feces and urine. In fact, in the United States, more people become sick due to their contact with rodents excrement (food infected with droppings, airborne dust from dried feces, etc.) than from actual rodent bites. In homes in the United States, the rodents that are most likely to be vectors of disease are mice and rats. Both of these animals are mammals that are fur covered, except for their tails. Although they are unable to fly like mosquitoes, their amazing agility and ability to climb mean that these animals can be a problem on any floor of a home.

Houseflies are a common nuisance in most areas inhabited by humans. Although they are relatively small, they can be dangerous because of the diseases they spread. Houseflies are known to transfer over one hundred pathogens. Unlike many other small flying pests that transfer disease through their bites, flies transfer disease by contaminating food and surfaces that people touch. Disease organisms are picked up on the silla that covers the fly’s body as well as in their bodily fluids like their saliva and urine. When a fly lands on a surface it will mechanically transmit disease in three different ways. First, when a fly lands on a surface they will regurgitate their saliva onto the surface to help in food digestion thus contaminating the surface. Next, flies drop urine and fecal matter constantly so they contaminate almost all the sites on which they land. Lastly, their silla, which often harbors disease, touches the surface and further spreads disease. Flies transfer some diseases that cause minor discomfort but they can also transfer serious diseases like malaria, salmonella, and tuberculosis.