During the summer, Cowleys gets calls for a wide variety of stinging insects including bees and wasps. In this case at a home in Fair Haven, NJ, became the new home to hornets that had made themselves a huge nest underneath a light hanging above the homeowners balcony. I guess they wanted to be near an entrance light. Hornets are large wasps that can create a nest bigger than a basketball if left untreated for too long. The hornets become very aggressive to humans and pets if they feel threatened when someone gets too close to the nest or if an attempt to destroy the nest is made. Most active during the hot and sunny summer days, hornets will build their nests rather quickly and live to serve the queen who remains inside to reproduce.

By eliminating the queen and removing the nest completely, an assurance is made that the hornets will not return to their nest and will move on to find a new place to live. We typically wear full protective gear when working with hornets. 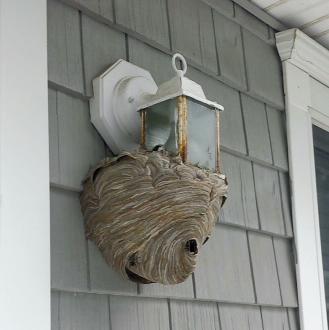 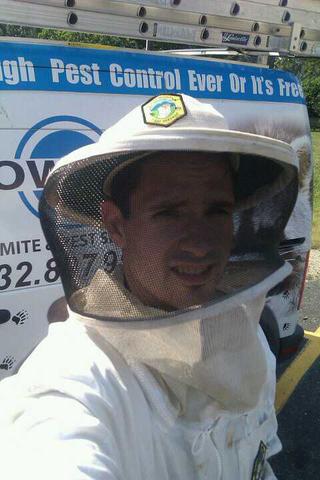 Protective gear is always necessary when dealing with bees.

Video: Home Getting Ravaged by German...
Video: High Stakes Hornets Nest in Asbury...
Back to Previous Page
Back to Case Studies