I was sent to a home in Monroe Township, NJ to resolve a starling infestation. Starlings rank right up there with pigeons and sparrows as one of the most troublesome nuisance birds. Starlings are an invasive species. About sixty of these birds were brought into New York and released in Central Park in the 1800s by a well-meaning individual who thought it would be nice to introduce every bird mentioned by Shakespeare into the United States. Big mistake! Starlings are now one of the most destructive nuisance birds in urban and rural areas. They ravage crops and their toxic droppings are responsible for several types of infectious diseases. These birds, which can form exceptionally large flocks that can number in the thousands, have become a major problem because of their nesting, eating, and living habits. Starlings compete fiercely for nesting cavities, ousting and often killing the original native birds, and destroying their eggs and young. Cowleys bird control specialists routinely deal with starlings that have nested in homes and commercial properties, especially warehouses.  Usually, when birds build a nest in or around a home, I’m able to access the nest and remove it without too much difficulty. In homes, we’ll find bird nests anywhere and everywhere in the most unexpected locations, but the more common nesting locations include bathroom or dryer exhaust vents, attic vent louvers, and all of those countless little crevices around homes like window-mounted air-conditioners. Sometimes, it's just a matter of removing a section of soffit and replacing it after removing the nest. Other times, I’ll be able to directly reach and remove the nest from inside the attic. Once the nest is removed, we then exclude the birds from where they were getting inside to prevent a re-infestation.  However, every so often, as happened with this particular assignment, the nesting area is completely inaccessible. This home was a Cape Cod style house. As with many Cape Cods, the once top-floor attic was finished and made into a living area. There were wall voids on both sides, and there was no more than one foot of space between the interior ceiling and the roof. There was little room for anything to fit inside this “dead zone,” especially a person. There was also no ceiling access hatch to even peak in and see what was going on or to maneuver around a pole to grab a nest.  How did these starlings get in? This house, as virtually all houses of this style, have gable vents. Gable vents are passive vents that allow for proper air circulation. Hot air rises, and these vents expel rising heat, allowing the attic/top floor of the home to “breathe.” Anyone who has ever lived in a Cape Cod knows that the roof space bears the brunt of outdoor temperature shifts. During the summer, the upper floor of Cape Cods can get wickedly hot and humidity can quickly build up in this area. During the winter, stagnant air can cause condensation to form. Ventilation in the upper area of the home helps to prevent mold and mildew growth throughout the year. These gable vents on this home were old and deteriorating, giving these little starlings more than enough room to make their way into this space.  Fortunately, the homeowner called us right away before the bird's nest was complete, so there were no babies up above. This significantly reduced the complication of having to make an access to reach them. However, I still needed to find a way to get the birds out without being able to access where they actually were. 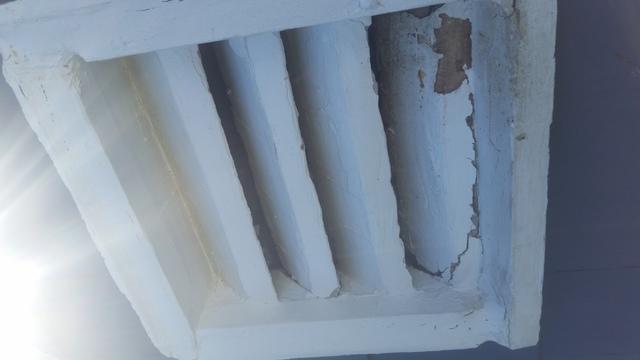 The lesson here is that passive vents like gable vents and soffit vents are potential trouble spots for birds and wildlife to gain access inside a home. They need to be periodically inspected and damaged or deteriorating vents need to be repaired or replaced as necessary or homeowners may find themselves with unwanted visitors. 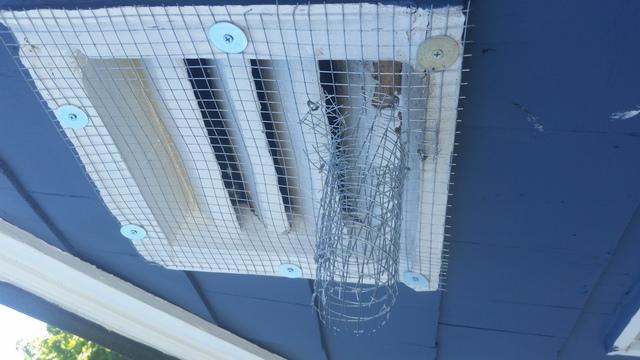 One-way trap on gable for birds in Monroe Township

This device ensured that any birds inside this void would be allowed only a one-way trip. After installation, it should be a matter of a day or two before all the birds are out since they need to leave the area for food. Once all the birds are out of this space, I'll remove the cone, and completely seal the gable vent until the homeowner can replace it. 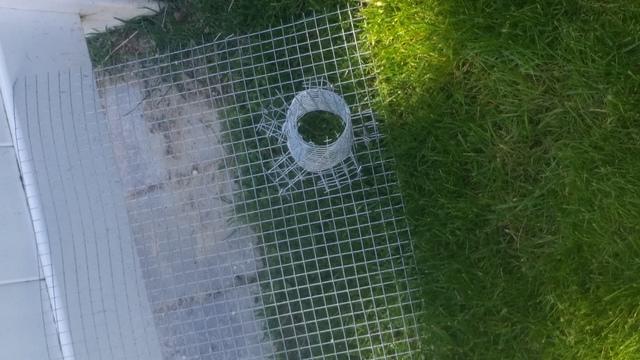 Here, I built an exclusion out of hardware cloth to cover the gable vent, and connected a customized "one-way" to it. The one-way was cone-shaped with sharp pieces of the hardware cloth at the end that would push outward to let the birds out, and discourage them to try and to get back in.