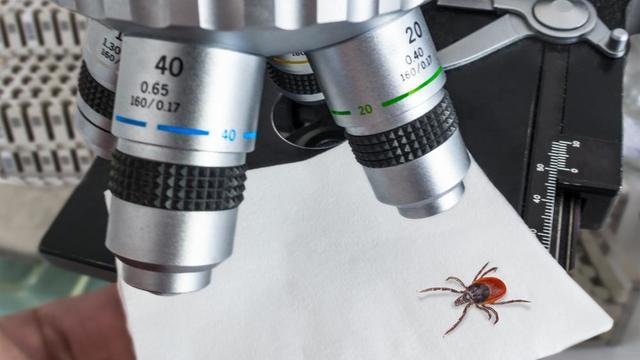 What is a tick?

Ticks are small arachnids in the same group as mites; they are not insects. Ticks, like fleas and lice, live on or in the skin but not within the body. Ticks are ectoparasites (external parasites) that feed on the blood of mammals, birds, and sometimes reptiles and amphibians. They must ingest blood to transition from one developmental stage to the next. Tick larvae feed and develop into nymphs (juvenile ticks) and then mature into adult ticks. They are able to draw blood from humans and animals by burying their jaws into flesh and sucking out blood with its straw-like mouth. Ticks are disease vectors, like mosquitoes, that can carry and transfer diseases to humans when accessing the bloodstream of its host to feed.

What is a deer tick?

Deer Ticks (Ixodes Scapularis) are also known as Blacklegged Ticks. They have eight dark, almost black legs and no antennae in their adult phase. The deer tick’s hard body is usually a light orange to brown color.   Deer ticks are flat creatures with a broad, oval-shaped body. However, when its abdomen is engorged with blood, the tick looks markedly different from its unengorged state. The typical deer tick is one-tenth of an inch or smaller. Most adult deer ticks are approximately the same size as an average sesame seed. Deer tick nymphs are approximately the same size as a poppy seed (less than one-sixteenth of an inch). It is smaller than many other ticks in New Jersey, including the dog tick, which can make detecting them even more difficult on a person.

Most important, deer ticks are disease vectors for Lyme disease. Other common ticks, such as "wood ticks" and "dog ticks" are not known to carry the infection. It is important to note that not every deer tick is infected so a tick bite will not automatically lead to Lyme disease.  If you find a tick, the safest course of action is to have an entomologist verify the type of tick. New Jersey Counties offer tick identification and testing services for deer ticks. In Monmouth County, ticks can be brought to the Mosquito Commission, 1901 Wayside Rd in Tinton Falls.

What are the other ticks found in New Jersey?

Besides deer ticks, there are three other ticks commonly found in New Jersey:  the American dog tick, the brown dog tick, and the lone star tick.

The American dog tick is relatively common in the state and is the largest of the eastern wood ticks. The average male tick is slightly larger than one-eighth of an inch long, while the female is larger than the male. Female American dog ticks get significantly bigger when they engorge. They usually become half of an inch long if they are full of blood. This reddish-brown oval-shaped tick has a mottling of light grey or silver on the “shield” on their back.

Brown dog ticks are also a reddish-brown and lack any easily recognizable markings. The brown dog tick has an elongated body shape. Like American dog ticks, adult brown dog ticks that have not consumed blood are about one-eighth of an inch long. Females that have fed on blood are about half of an inch long and have a blue-gray coloration. Males are smaller than females but are colored very similarly. Due to their shield design, these ticks are often confused with deer ticks during later engorgement. A significant distinction between the two types of ticks is that the mouth part of the brown dog tick is much shorter than deer tick mouthparts.

The female lone star tick is easily distinguished from any other tick by the noticeable white dot or star shape in the center of her brown colored back. The males are slightly harder to recognize because they do not have the distinct star, instead, the males have spots or streaks of white around the outer edges of their brown colored body. From personal experience to the untrained eye, these small ticks closely resemble deer ticks, and receiving a confirmation by the entomologist at the Mosquito Commission is well worth the drive.

Where and when can deer ticks be found?

Deer ticks are found in all counties of New Jersey. While ticks are often in wooded and rural areas, they are not limited to the great outdoors. Ticks can just as easily be found in your backyard, carried there by a white-footed mouse. They can even be carried into a home or building on a rodent or a person’s clothing. Deer ticks can be found in nearly any area that deer and other wild animals are present, which in New Jersey, is pretty much anywhere.

Deer ticks can be active all year long, even throughout the winter months, if the temperatures remain above freezing. Late spring and early summer are particularly dangerous times of the year for ticks in New Jersey because ticks are in their nymphal stage. Nymphs, which can still transmit diseases, are much smaller, about the size of a poppy seed, and can be very difficult to find on a person.

How does a deer tick manage to bite me?

When deer ticks are looking for food they spend a great deal of time on the tips of low-lying vegetation and shrubs, not in trees, because this is the area they are most likely to find a host. Generally speaking, ticks attach to a person or animal on or near ground level. Because deer ticks cannot fly or jump, they quest, that is, grab onto their host when the person or animal brushes against vegetation. The tick then crawls upwards to find a place to bite often in the folds of skin or bends of the arms or legs. In short, you go the tick; the tick doesn’t come after you.

Article: April Showers Bring May Flowers, and Mosquitoes Too.
Article: Essential Tips To Reduce Your Risk Of Lyme Disease
Case Study: Termites and Their Mud Tubes Found Throughout Basement in Freehold, NJ
Video: A Mosquito & Tick Reduction...
Video: A Thorough Mosquito & Tick...
Photo Gallery: Conducive Conditions for Mosquitoes in Franklin...
Photo Gallery: Termites Found in an Office in Lakewood, NJ
Back to Previous Page
Back to Technical Papers