These are recent pictures of some hornet and wasp nests that have been removed by the fearless Cowleys Pest Control Services technicians. No doubt, wasps and hornets are the stinging insects that strike the most fear when they are flying around. And for good reason. Their stings are very painful, and, for those who are allergic to their venom, their bites can be life-threatening. Fortunately, the threat of these insects goes away with the cooler weather. They die in the fall with only the fertile queens over-wintering However, once warmer temperatures resume, they return a vengeance. Yellow jackets, with their trademark jagged bright stripes of yellow and black on the abdomen, are highly aggressive wasps. Some species of yellow jackets are aerial, building grey, roughly football or teardrop-shaped paper nests. They make this paper themselves, like all wasps and hornets, by chewing on tiny slivers of wood or other organic materials and using their sticky saliva to glue it together into organized cells. European hornets, the only true hornets in the United States, are also aggressive, and because of their markings, are often confused with yellow jackets. Paper (Red) Wasps have the slender “wasp” waist and long legs usually associated with wasps. They build a small paper nest with open cells in a single layer. Bald-faced hornets are black with ivory markings on their faces and abdomens. They build a grey spherical paper nest sometimes 12” or more in diameter. The nest is abandoned in the fall when the colony dies and is usually not reused. They are a physically strong insect and are capable of stinging through a layer of thick clothing. If you see these types of nests anywhere in your home extreme caution is advised. If a family member is allergic to a bee and is stung, the reaction might be serious enough to warrant a trip to the hospital. A bad reaction can occur even if the allergy had previously been non-existent or mild. Also, an individual’s bites can worsen after repeated exposure to bites. Multiple bites are a significant health concern to the elderly and small children. Don’t waste time with over-the-counter sprays. These sprays are almost never applied in the correct locations and these products wind up doing little good; most of the bee or wasp colony survives. The most challenging part of wasp and bee removal of the nest, not spraying, and often a homeowner does not even know where the actual colony is located. A pest control professional knows exactly where to spray to reach the colony and has products that will not cause harm to your family and pets. One serious DIY mistake is sealing the entrance hole! If you see any of these insects flying in and out of a rack or crevice of your home, many homeowners sealing the entrance with caulking or foam. Don’t do it! When you seal the entrance, you’re not sealing them outside, rather you re trapping them inside, typically by the thousands. They will work had to find some other way out and that is often into your home through electric outlets, light fixtures,and vents. Some of these insects are even strong enough to chew through drywall. 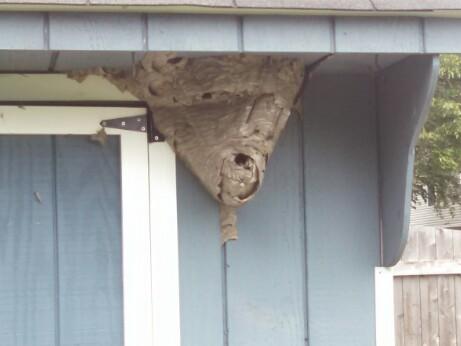 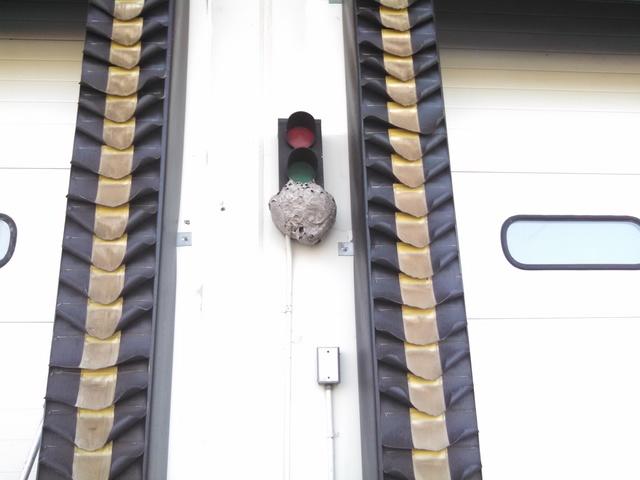 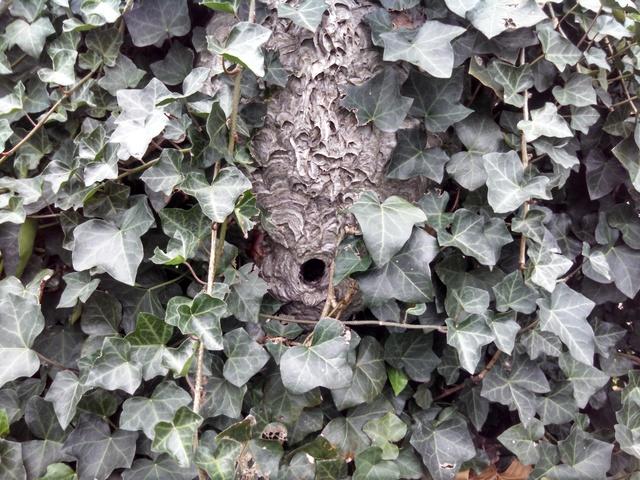 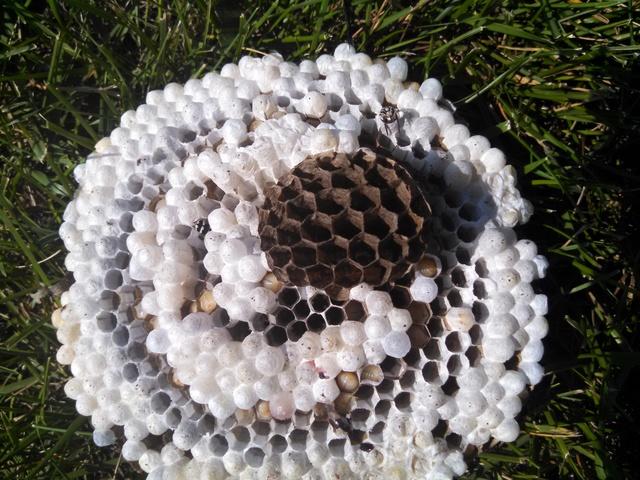 Hornet comb from top of nest. 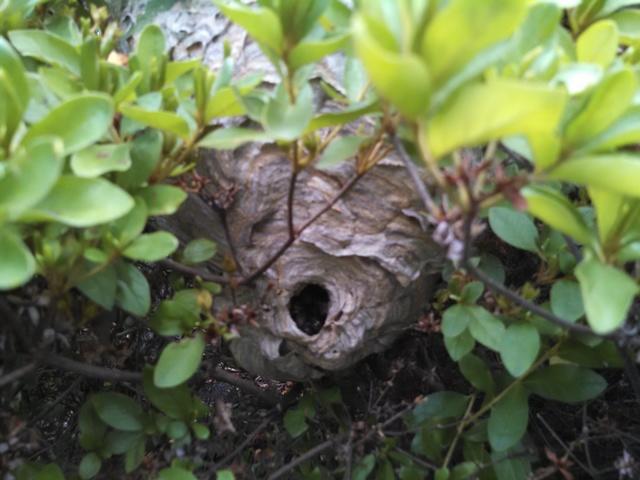 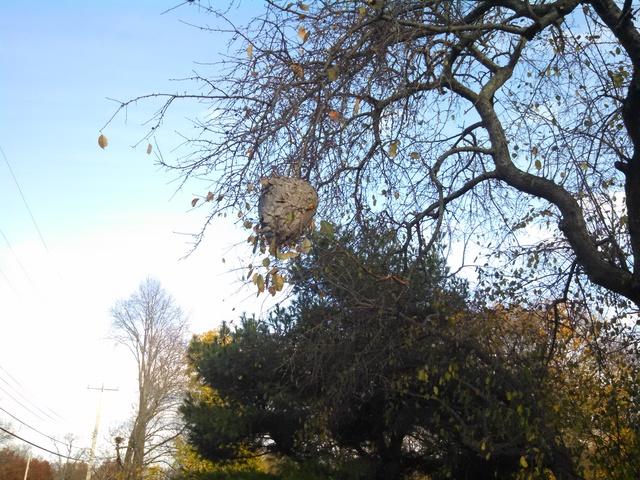 A lofty Hornet's nest on Tree. 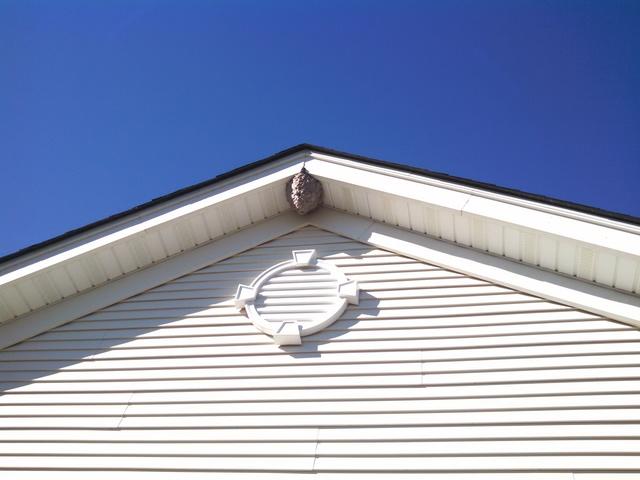 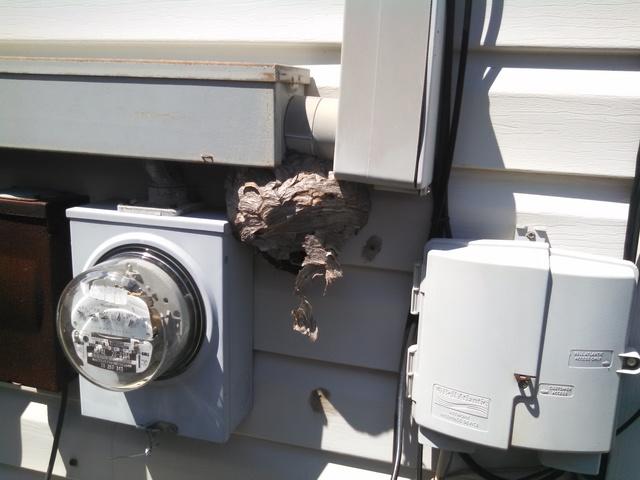 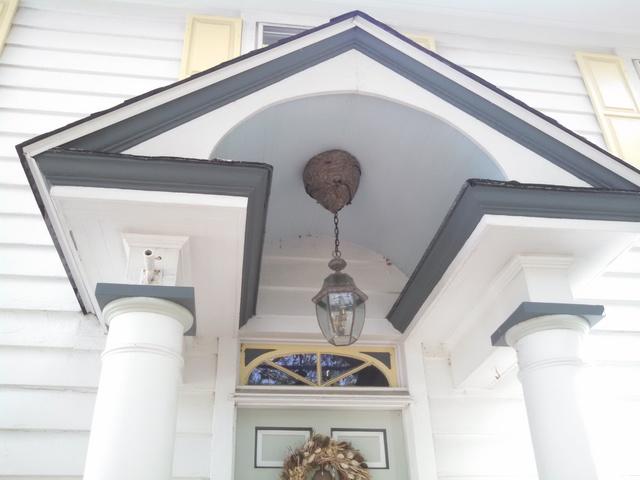