Stink Bugs Stinking Up Your Home?

Stink Bugs get their name for the stench they give off when crushed. They are also known as shield bugs because 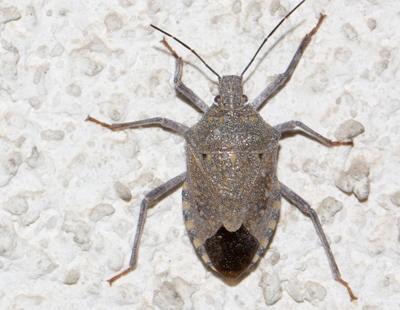 of the shield-like shape of their body. Stink Bugs can be green or brown in color and approximately one-half-inch in size, possibly even larger.

Stink Bugs are believed to have been first brought into North America in 2001, when they showed up in a shipment from Asia going into Allentown, PA and have evolved as a major nuisance pest for property owners across much of the U.S. Stink Bugs are also a serious agricultural pest and a major concern for farmers, particularly here in Southern New Jersey.

While outdoors during warmer months, Stink Bugs feed on plant materials and cause millions of dollars in economic damage every year by destroying crops. As the weather turns cooler in the fall, they will move indoors and spend the winter months inside of wall voids, attics, flooring, and other hidden areas of the home. We get calls from Rumson to Freehold as early as September. During the spring and on unseasonably warm days throughout the late fall and winter, Stink Bugs will make an appearance inside of a home or business. Depending on the population that entered the home in the fall, they can appear inside of the home in large numbers. Once inside, Stink Bugs are very difficult to control. The best strategy when it comes to Stink Bugs is to prevent them from ever entering your home or business.

What Attracts Stink Bugs to Your Home

Stink Bugs prefer to live outdoors, however, seasonal changes in temperature and day length here in New Jersey prompt Stink Bugs to move indoors to find shelter for the winter. A recent study conducted by the USDA shows that houses painted brown and those with sealed wood attract the most pests. Cracks and crevices around the home offer Stink Bugs entryways into the structure. Once inside, they will look for warm areas and will hibernate in light fittings, insulated walls, crawl spaces, and under floorboards.

Are Stink Bugs a Danger to Your Home?

The biggest problem that New Jersey homeowners face when it comes to Stink Bugs is that once they are inside, they can be really difficult to control and are a nuisance to have around. Stink Bugs are not known to carry diseases; they don’t bite, won’t destroy clothing or fabrics, and will not raid the pantry. Home and business owners' biggest complaints are that when crushed they stink and that they are a nuisance to have appeared around the home.

Stink Bugs invasions can be prevented. Before the temperatures drop in the fall, homeowners should consider pest-proofing the house, both inside and out, to prevent Stink Bugs and other pests from becoming uninvited houseguests for the winter.

1. Seal off entry points: Take some time to inspect the outside of the home for easy entryways for pests. Pay close attention to areas such as behind chimneys, around siding and utility pipes, and beneath the wood fascia or other apertures. Seal any holes or cracks that are found using caulk.

2. Turn off the lights: Stink Bugs will move toward lights. Keep outdoor lighting to a minimum to minimize attracting Stink Bugs to the home. During the evening hours, consider pulling down window blinds and turning off porch lights to prevent light from spilling outside.

3. Replace and repair: Stink Bugs can access a structure through the smallest openings, so it's very important to replace or repair damaged screens on doors or windows. Don't forget to check for loose mortar and torn weather-stripping. Door sweeps can also be installed if needed.

4. Reduce moisture sites: Removing all moisture sources around the home can really go a long way to help avoid several pest infestations. All living things need moisture and water to survive so eliminating sources of water in the home will help to reduce pest propulsions overall. Use a dehumidifier in these areas. However, make sure to install screens over attic and roof vents as they can be access areas for Stink Bugs and other pests.

5. Check your belongings: Check grocery bags, box shipments and any other stored products brought into the home or business for pests like stink bugs. Infested items can easily introduce Stink Bugs or other pests into a home or business.

7. Treat the perimeter of the structure: A pest professional can create a well-timed treatment plan for the property that will knock-down stink bug populations before they can enter a structure in the fall and then again after any leftover Stink Bugs exit a structure in the spring. Regularly treating the perimeter will reduce Stink Bug numbers and alleviate indoor invasions of stink Bugs.

If Stink Bugs have invaded a home or business the best management techniques are to avoid crushing the pest. When crushed or disturbed, Stink Bugs have a tendency to emit a foul-smelling odor that can linger indoors. Instead, use a tissue to gently grab the pest and flush down the toilet. Another alternative is to vacuum visible Stink Bugs that are appearing indoors. Use a vacuum cleaner with an extension. Dispose of the vacuum bag or promptly empty the canister outdoors in the trash.

Following the above Stink Bug prevention tips can go a long way in reducing the likelihood of a Stink Bug invasion.

Video: TechTalk: All About Stink Bugs
Video: Stink bugs invade home in Avenel,...
Back to Previous Page
Back to Technical Papers