Ants Take Control of Back Patio in...

Ants Carrying Our Bait in Sea...

These Sea Girt homeowners had a wildlife infestation in their attic. They had an exclusion done by our nuisance wildlife team who blocked all of the potential entry points into the attic. Unfortunately, although the wildlife was gone and could not re-enter, the homeowners were left with destroyed attic insulation and a toxic mess of animal droppings.

I was sent to a home in Belmar, NJ to help a homeowner dealing with a bird infestation. Some birds had decided to use her chimney to nest. Chimneys can be quite popular nesting spots for birds since they resemble high perches in nature. Nuisance birds can cause significant property damage with their acidic droppings. As pretty as birds are from a distance, they happen to be dirty wildlife and are dangerous to have around homes and other structures. Their droppings are toxic and contact with them or even just  breathing in their airborne particles can cause serious respiratory diseases.

First, to deal with this bird infestation, I carefully removed any nesting material and debris left behind from the birds in the chimney. I then installed a chimney cap and placed Bird Barrier Optical gel in plastic pucks on top of the chimney, gluing them in place with a silicone adhesive.

Bird control is all about behavior modification. The objective is to create a inhospitable environment, so they move elsewhere. This bird gel is one of my favorite bird deterrents. To us, this product looks like a bland, boring white gel. However, birds look at it much differently. They have far better color vision that us and see a much broader spectrum of colors. To birds, this gel looks like a giant fireball. Birds aren’t the brightest of creatures, but no bird has any interest heading into a raging fire! This big bird illusion is highly effective in keeping them away.

This Belmar homeowner was quite relieved that I had taken care of her bird problem so quickly. Once birds find a good nesting spot, they don’t usually leave on their own. As a bird control specialist, my job is to determine the best “incentives” for that property to get the birds to vacate on their own. Now, with the chimney cap and optical gel, these birds will be relocating to a friendlier location.

Dehumidifiers in Condominium Complex Gets Upgrade in Sea Girt, NJ

We went out on a call from a property manager in Sea Girt, NJ who owned a condominium complex. The property manager mentioned that the dehumidifiers in the basement of his complex needed an upgrade. The current dehumidifiers he had were too small to properly treat the areas needed and they kept malfunctioning. A dehumidifier is a great air treatment solution for removing excess moisture around your home and protecting it from damaging mold. Dehumidifiers can help relieve allergy symptoms as well as lung and respiratory symptoms. The fact that the dehumidifiers kept malfunctioning and weren't large enough to properly service the room, made them useless.

Two of the dehumidifiers were in rooms that were back-to-back. We are able to place the water evacuation tube (which filters the water out of a dehumidifier) from the dehumidifiers into a commercial utility sink. As for the other dehumidifier, we were able to use the existing condensation pump that was in perfect working condition. Now the rooms can be treated properly! 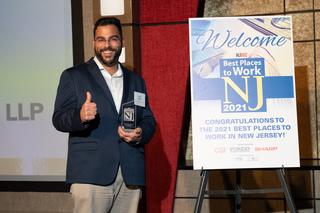 Here at Cowleys Pest Services we not only adhere to the highest pest control standards, our goal is to provide you with an excellent experience and service in Sea Girt and nearby NJ.

Since 1991, we have been treating a wide variety of pests, bedbugs, insects and rodents -- just contact us to get more details on your home or building's issue. Take advantage of our expertise to get rid of unwanted pests or animals in your Sea Girt, NJ home. 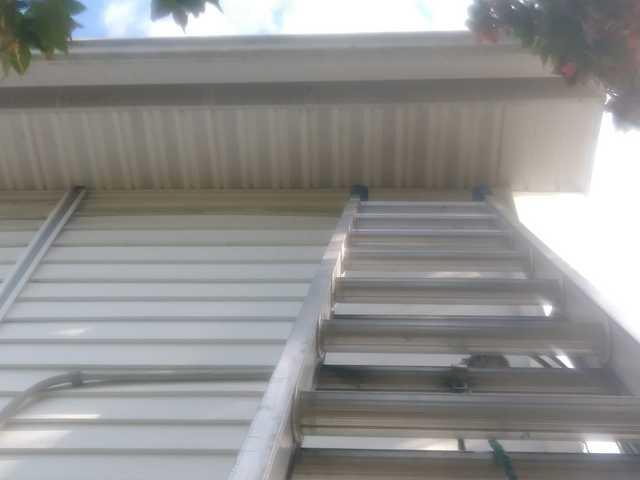 Recently, I was sent to a home in Sea Girt, NJ, to deal with a messy squirrel and bird infestation. The animals had found shelter in open soffits...
Click to read solution... 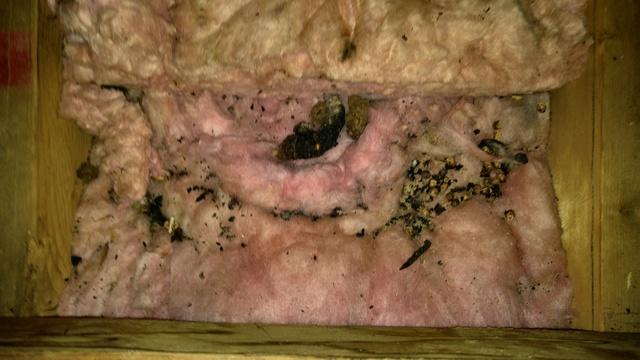 After our Nuisance Wildlife team performed a wildlife exclusion in a home in Sea Girt, they still were left with a toxic mess, and soiled insulation.
Click to read solution...

Recently, I went out on a service call for a homeowner in Sea Girt, NJ. This homeowner's daughter spotted a hornet's nest in a tree high above her...
Click to read solution...
More Case Studies
Photo Galleries From Sea Girt

We work very hard to leave no trace behind.

Here we insulated the area.

I thoroughly sprayed the area to kill off any bird mites, and replaced the contaminated insulation with spray foam.
Job Stories From Sea Girt, NJ
Be careful of spider crickets in Sea Girt, NJ

Recently, I was sent to a home in Sea Girt, NJ,  after Cowleys received a call from a homeowner who found herself with a cricket infestation inside her home, primarily in the basement. Upon arrival, I went into the basement to inspect, and observed a heavy presence of spider crickets, also commonly known as camel crickets, in the laundry room area of the basement. From a distance, these crickets resemble spiders or shrimp because of their gangly long legs and antennae.

Spider crickets are much different than a few field crickets that periodically find their way into homes. Spider crickets usually congregate in large numbers, and you can find hundreds of them can be clinging to walls in basements or crawl spaces. It’s a scary sight, to say the least! Unlike field crickets, they don’t make that familiar chirping sound we hear when the males rub their ridged upper and lower wings together to attract females. Instead, spider crickets attract mates by emitting a smell. A word of warning: When alarmed or threatened, these insects often jump directly at the intruder. So, don’t get too up close and personal with them.  You may find yourself with a spider cricket firmly planted on your face — and they bite!

Because of their hump-shaped bodies, spider crickets (sometimes shorted to “sprickets”) are also called camelback, camel crickets (“criders”), or even “land shrimp.” These crickets are naturally found in caves, so they are also known as cave crickets.

They are attracted to and thrive in enclosed dark, moist, and humid spaces. Basements, crawl spaces and garages can have a similar environment to a cave when there is high indoor humidity. So, you’ll often find them in homes with a mold or mildew problem because they feed off any fungi that grows on damp walls. Because spider crickets can be a sign of a mold problem, any home with a spider cricket infestation should be inspected for possible mold. Besides fungi, these voracious eaters will consume fabric, carpets, cardboard, dust, plants, and even each other.

When dealing with a spider cricket infestation, I’m always interested in the moisture conditions causing infestation, so that the problem can be resolved long-term. Here, the laundry room had finished walls and was very dry. However, the rest of the basement was unfinished with concrete block walls. Also, there was a French drain around the perimeter of the unfinished section to drain water away from the foundation into a sump. Although the unfinished part of the basement was fairly dry, there was still plenty of moisture for these crickets to thrive.

In resolve this infestation, I treated the French drain and walls inside the basement and also performed a perimeter treatment around the exterior foundation of the home as well as under the exterior siding. However, because a spider cricket problem is an indication of high indoor humidity levels, the long-term solution is keeping down moisture levels by installing a commercial-grade dehumidifier. There are multiple benefits to dehumidification: By keeping your basement dry, you remove the conditions for mold to form, improve the air quality of your home, and make the area much less inviting for spider crickets and other invasive insects and pests. Hopefully, this homeowner will consider dehumidification.

This week I was called to a home in Sea Girt, NJ that managed to have two different stinging insect infestations going on at the same time. Both a yellow jacket nest and a baldfaced hornets nest had formed on the property. Baldfaced hornets are actually a type aerial yellow jacket. Both of these predatory wasps are highly aggressive and very territorial. If these insects feel you are intruding on their nest, you are in for a world of hurt! Yellow jackets, with perhaps the worst reputation of any wasp, have distinctive alternating yellow and black stripes that have us instinctively running in the opposite direction. Baldfaced hornets are larger wasps with distinctive white markings on their face and abdomen.

The baldfaced hornets nest was built on a branch of a tree on the property. It was active for awhile and had grown to the size of a basketball. These wasps build their nests at least a few feet above ground in trees, shrubs, and sometimes on the sides of buildings, especially under eaves. I was not about to take any chances being stung myself, and put on a protective suit. I treated the nest with an aerosol and then a dust. After there was no observable insect activity, I removed the nest from the tree. The yellow jackets had built their nest in crack of house foundation. Yellow jackets typically build their nests inside wall voids, holes in the ground, or other similar openings they can squeeze into like the nest here. These insects managed to find a big enough void in the home’s foundation to build a nest. I treated the void with a highly effective dust to kill the yellow jacket colony.