GET DISCOUNT Close
Contact Us Online 1-855-239-9059
Contact Us For
A Free Estimate!
Reviews From Milltown
See All Reviews
Related Videos

Here at Cowleys Pest Services we not only adhere to the highest pest control standards, our goal is to provide you with an excellent experience and service in Milltown and nearby NJ.

Since 1991, we have been treating a wide variety of pests, bedbugs, insects and rodents -- just contact us to get more details on your home or building's issue. Take advantage of our expertise to get rid of unwanted pests or animals in your Milltown, NJ home. 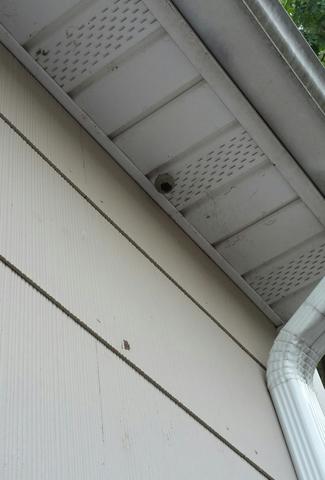 As a homeowner, how often do you look up and inspect the eaves of your roof or your home’s soffit, that area enclosing the underside of that...
Click to read solution...
More Case Studies
Photo Galleries From Milltown

Lastly, using the paint the homeowner provided me, I painted the cedar shakes so that it looks exactly like it did before the damage.

I made sure to fill in every hole.

Next, I patched the holes using a wood filler.
Job Stories From Milltown, NJ
Double punch with Raccoon and Squirrel infestation in Milltown, NJ

Usually, with wildlife infestations in the attic, we are only dealing with one species of animal at a time. Whether its larger animals like raccoons or squirrels or smaller ones like mice, they usually live alone. During our inspection we look for clues to determine the type of animal if we aren’t fortunate enough to catch the animals red-handed. The usual clues are the type of noise and the time of day when the noises are mostly heard, the size of the entry hole, the identification of the feces, animal tracks if there is dust in the attic or there are muddy prints, the type of damage left by the animal, and finally, experienced wildlife technicians can identify the trademark scent of the animal and the fur that is left behind.

Very rarely do we come across a situation where squirrels and raccoons are entering and occupying the same space at the same time. Raccoons, by far the larger, stronger, and more vicious of the two species, would simply not allow a squirrel to be in the same location, especially a mother raccoon caring for her young. Raccoons tend to be nocturnal, sleeping during the day. They would not appreciate the noise of squirrels, which are active during the day.

However, situations can sometimes present themselves where the two animals can manage to occupy the same space “without stepping on each other’s toes,” so to speak. When the weather is warm, raccoons will not necessarily return to the attic every day to sleep. Instead, since they don’t need to escape the harsh outdoor elements, they can sleep outside when the weather is accommodating (just like we do when we go camping on warm summer nights!).

With this home in Milltown, NJ, there was evidence of both squirrel and raccoon activity. The access point into the attic was more than enough to accommodate a raccoon, so either animal could have entered. Identification of animal feces indicated that bother animals were, at one time or another, present there. However, I wanted to see which animals were activity using the area in the home. i placed tape across the access hole. First, I wanted to see if any animals were actively using the space, and if so, what animal species was trespassing. When I returned to check the tape, sure enough, there was BOTH squirrel fur and raccoon fur stuck on the now-broken tape. Somehow, this odd couple of animals were able to tolerate each other’s presence.

Ince I determine the particular animal I am dealing with, I can then strategize the best solution to resolve the animal infestation and set the right traps with the right bait. In these very rare situations where I am faced with different animals, the process may take little longer, but rest assured, the end result will be the same for the homeowner — we will evict the animals from the attic and then seal the entry points to prevent a re-infestation.

We just started getting mice in the basement. We know there are entry points along the house, but we would like a technician to find these entry points and remove the mice.
Vicinity of Farrington Ave in Milltown

Looking for estimate for termite
Vicinity of West Lawrence St. in Milltown

We have a hornets nest, I think it's a Paper Hornet Nest, in a holly tree. We would like to know how much it would cost for removal. And what would you do to remove it. It's about the size of a football. Thank you, Marybeth Kayne
Vicinity of N Main St in Milltown

I have a bat on the attic. This happens every year
Vicinity of Herbert Avenue in Milltown

Tick reduction. We have 20 - 30' pine trees that line our property, and an active dog/preschooler who loves to play in them.
Vicinity of Kohlhepp Ave in Milltown

Mosquitos. Ticks and carpenter bees outside attick side of house
Vicinity of Zimmerman Court in Milltown