As temperatures drop, mice will seek refuge in your home to escape the harsh winter elements. For a mouse, your home is paradise — it’s always warm and cozy, there are plenty of nooks and crannies to hide, there’s plenty of nesting materials,  and your kitchen offers an unlimited food supply. ,

Whenever we are called out to resolve a rodent infestation, we not only treat the infestation. It is critical to determine how these disease-carrying animals are accessing your home. Here, in this home in Keansburg, I determined that mice were gaining access through gaps around AC lines entering the home. Utility and telephone lines entering your home to are common access points for small rodents like mice and they are always on the top of my “must inspect” list. A small gap around wiring or pipes that we easily overlook is, for a mouse, a wide-open entrance way that offers 24/7 access  into your home. Unfortunately, because of their diminutive size, mice can slip through the smallest of gaps and cracks, and these openings can sometimes be a challenge to find. I set up traps in the home and sealed the entry point to prevent further access. These pictures show the “before and after”  sealing of this entry point.

I’ll be returning for a follow-up visit in two weeks to make sure that these overwintering mice are gone for good.

Squirrels find easy access into Keansburg, NJ home from below.

Some wily squirrels were able to successfully deceive a previously hired nuisance wildlife serve at this Keansburg, NJ home and escape capture. Apparently, the technician focused on looking up and over the roof of this home for potential access points to try and keep the squirrels out. To be sure, squirrels are arboreal rodents and they often initially access the home by first making their way to the roof, usually by either by traversing wires coming into the home or using overhanging branches as a roadway. However, squirrels don’t always access the home through the roof, fascia, or  soffits. Good wildlife technicians have 360 degree thinking and look at the entire picture, always taking into account every possibility.

I first asked the homeowner where she was hearing most of the wildlife activity. This often gives me a good starting point of where to start the inspection for entry points. She told me that most of the noise was coming from inside the wall voids of the first floor — nowhere near the roof or attic. Based on this, I decide to first inspect below rather than above. Sure enough, these squirrels were gaining access to the home behind the plaster walls of the living room from below the front porch.

The best course of action was excluding them by setting up a one-way device over the opening that allowed them to leave the home, but prevent their return. For the rodents, it’s a one-way trip! After sealing this area and monitoring it for activity for two days, we sealed the opening for good.  We followed up with the homeowner who told us that she’s heard absolutely nothing in the walls after our exclusion. These squirrels were permanently evicted. Needless to say, after a few too many weeks of frustration, she was quite relieved that her squirrel problem was finally resolved.

I could not be more happy and pleased with Cowley's and their outstanding customer service......
Testimonial from Patrick from Hazlet Township, NJ
Happy Customers Surrounding Keansburg, NJ
Testimonials
Reviews
Work Requests

Here at Cowleys Pest Services we not only adhere to the highest pest control standards, our goal is to provide you with an excellent experience and service in Keansburg and nearby NJ.

Since 1991, we have been treating a wide variety of pests, bedbugs, insects and rodents -- just contact us to get more details on your home or building's issue. Take advantage of our expertise to get rid of unwanted pests or animals in your Keansburg, NJ home. 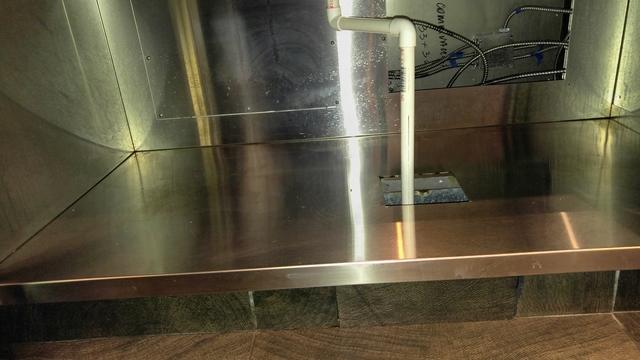 For restaurants and other food service businesses, proper sanitation protocols and practices are the key for preventing insect and rodent...
Click to read solution...
More Case Studies
Photo Galleries From Keansburg

When it comes to restaurants, strict sanitation protocols are so important to prevent rodent and insect infestations. When food debris or grease accumulates under and around counters and appliances, it is only a question of time before cockroaches, rodents, and other scavengers take advantage the...

In most cafeterias, including this one, the booths have removable bench seats for easy cleaning and replacement, if needed. While removing one of the seats to see what may be lurking underneath, I found some food debris and mouse droppings (see picture). This was one smart mouse who understood that...

Finally, whenever there is a rodent problem, I am always concerned about potential access points. While inspecting exterior areas nearby the cafeteria, I found some pipe chases (false walls for hiding pipes) that needed to be rodent-proofed. Management assured me these areas would be sealed to...
Job Stories From Keansburg, NJ
A little cold weather doesn't stop termites in Keansburg

To reach the wood in your home, termites often build mud tubes. These networks of tunnels, often found criss-crossing a home’s concrete foundation, provide protection for termites as they move to and from their nest to their food source, the wood in your home. The tubing, constructed from wood pulp and their saliva and feces, protects these soft-bodied insects from drying out and from predators.

I was dispatched to a home in Keansburg for a termite treatment. Unlike most other insects that either die or become inactive during the cold winter months, subterranean termites are open for business all year round. These guys stay all nice and warm by setting up shop underneath your garage or other areas that give them unrestricted access to your home’s wooden structures.

Here, during my inspection, I found active termite mud tubing on this home in early winter. Just because it’s December and the ground is starting to freeze, don’t make the mistake of thinking that termites can no longer cause any property damage. No self-respecting termite would even think of letting a little cold weather stop him from invading your home!

Praying Mantis offers to help our termite team in Keansburg

During a termite treatment at a home in Keansburg, a beautiful Praying Mantis appeared as if to help us get rid of the termites. Mantises are special insects. In fact, their name “mantis” means prophet or seer, and many ancient civilizations that believed this insect was bestowed with spiritual or mystic powers. A mantis is one insect that commands respect. One of my favorite movies is the Deadly Mantis, a 1957 horror film where a giant praying mantis freed from the Arctic Ice terrorizes our cities.

The “praying” part of their name comes from its prominent front legs, which are bent together at an angle that makes them look like they are praying. Unlike any other insect, a mantis has the ability to turn its triangular head, which is poised on a stem-like thorax, from side to side a full 180 degrees. A mantis is both the hunter and the hunted on the food chain. A mantis scans for prey and for animals like bats and spiders who eat them. And these insects can see! They not only do they have two large compound eyes, but they also have three simple eyes located between them.

As a pest control technician, I admire these unusual insects and, to me, they are  kindred spirits. Just like me, a praying mantis is a formidable predator. These efficient and deadly hunters are naturally well-camouflaged, with coloring and a shape that make them look like leaves or branches, seamlessly blending in with their surroundings. A mantis will lie in ambush or patiently stalk their quarry, and when ready, will pounce on its prey with lightening-fast reflexes, snaring its victim with its front legs that come equipped with sharp grabbing spikes. A mantis is a carnivore that eats a wide variety of insects and small animals like frogs, lizards, and even small birds. And they don’t waste any time, usually gobbling down their prey head first.

These beneficial insects are welcomed addition to the backyard, helping to reduce populations of a variety of insects that damage vegetation. Their only possible negative trait is only a concern to the male mantis. The adult female often eats her partner just after, or even during, mating. Surprisingly, the males don’t seem to mind and appear happy to reproduce — even if it means that they have to pay the ultimate price!

I carefully picked up this mantis and relocated her to a nearby rosebush where she could continue ambushing unsuspecting insects. The lesson here is that a good pest control technician should have an eye for detail, even noticing the lone praying mantis. Also, when treating a home, we focus only on the harmful insects and leave the beneficial ones like the praying mantis alone. Not all insects are “bad.” Some support us in knocking down harmful pest populations, and we should encourage them to thrive.

Do you relocate a raccoon that is already trapped in a cage?
Project Location: Keansburg, NJ

My tenants are complaining of rats in their home.
Project Location: Keansburg, NJ

2 holes under shed think its a ground hog and i noticed a hole by my ac unit by foundation
Project Location: Keansburg, NJ

We have carpenter bees and would like a quote on your pesticide service.
Project Location: Keansburg, NJ

I live in an apartment complex and I think there may be bed bugs in my apartment
Project Location: Keansburg, NJ

I discovered the hole on my aluminum fascia cover where squirrels came in last year. Looking to reair
Project Location: Keansburg, NJ

I have a bi-level home with solar panels, there are 2 families of pigeons living under there. I want to find out how much it will cost to remove them so I can have the panels rodent and bird protected.
Project Location: Keansburg, NJ

We are pretty sure we even have squirrels in the eaves or possibly in the attic but they has been running around like lunatics on the roof.
Project Location: Keansburg, NJ

Carpenter bee problem in the eve of my home. Would like an estimate on removal. Thank you
Project Location: Keansburg, NJ

Need to have the house checked out for bedbugs.
Project Location: Keansburg, NJ

We have a catbird or mockingbird in our yard that is attacking us, our dogs and our neighbors, whenever we are outside. This has been going on for over a week, but has gotten much worse as of yesterday. Can someone please help us with this issue? It has gotten to the point where we can't even go out in our own yard. Please help!
Free Quote
Service Area