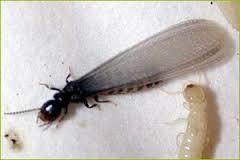 I was called out to a house in Toms River over the weekend. The customer had found flying insects in the kitchen. I assumed the customer had done some research before calling, because the appointment was set up for "termite swarmers." I must admit, my initial reaction was "There is no way he is having a termite swarm in February."

Spring typically is when large numbers of winged termites, known as "swarmers"emerge inside homes. In nature termites swarm to disperse and start new colonies. Triggered by warm weather and rainfall, the winged termites emerge from the colony and fly into the air. The swarmers then drop to the ground, shed their wings, pair of with a mate, and attempt to begin new colonies in the soil.

Swarmers emerging indoors cannot make it to the soil to burrow and start a new colony, so they will simply die off, but seeing swarmers is a great indication of a termite problem under or around the home. In this case, after identifying the sample the customer had saved for me, I started my inspection in the crawl space. I found a  large "mud tube" right under the stove area, the exact area where the termites swarmed in the kitchen. These tubes are frequently made from mud/dirt and termite droppings and are one of the common signs of termites, especially in places where termites are found in abundance. The purpose of termite mud tubes is to provide shelter and protection from predators. They also minimize moisture loss among the termites traveling inside the tube. (subterranean termites wont survive long if exposed to the air)

I treated the termite mud tube in the crawl space with Termidor®  termiticide foam, and set the customer up to have a full perimeter termite treatment done to the home. The customer was extremely happy that we were able to identify the insect, start the treatment immediately to minimize the chance of damage.